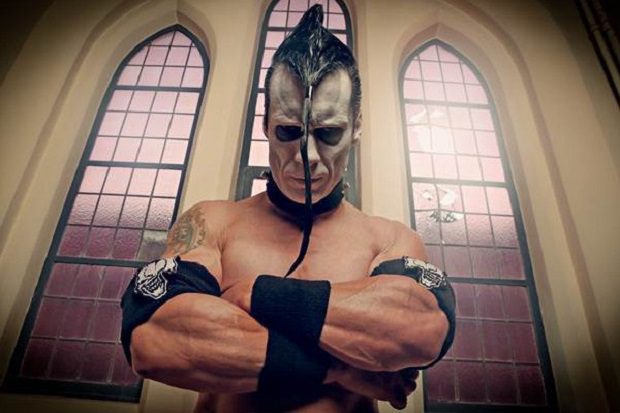 Doyle Wolfgang Von Frankenstein — the former guitarist of both the old and new MISFITS and current leader of his own horrorcore/metal band simply called DOYLE — says that he is intent on reuniting MISFITS‘ original lineup for a tour and possible new album.

The original MISFITS band broke up in 1983, and bassist Jerry Only brought forth a new version of the MISFITS in 1995. Various members have come and gone, but Only, along with BLACK FLAG‘s Dez Cadena, has kept some form of the MISFITS in the recording studio and on the road for most of the last two decades.

After the original MISFITS disbanded, vocalist Glenn Danzig went on to form SAMHAIN and then the eponymous DANZIG. Several albums of reissued and previously unreleased material were issued after the group’s dissolution, and their music became influential to punk rock, heavy metal, and alternative rock music of the late 1990s and early 2000s.

“I’m the only one that’s gonna get the original lineup back together,” Doyle said in an “Idol Worship” interview Alternative Press arranged between him and BLACK VEIL BRIDES frontman Andy Biersack. “So I think I’m going to work on that, and hopefully I can pull the two bulls together and get them to fucking stop.”

He continued: “You know what? I’ve just decided this week that I am going to make an attempt, and I wanna do it. I’ll put what I’m doing right on the fucking side. I’ll go do it tomorrow.”

Doyle also spoke about previous meetings he, Danzig and Only had had in 2002 discussing a possible MISFITS reunion, plans for which were aborted when an unknown party leaked the news. “It didn’t happen and it’s a shame,” Doyle said. “It’s stupid that we’re not doing it. It would be huge.”

In a 2011 interview with RollingStone.com, Only stated about the prospect of reuniting with Danzig: “I would say that if Glenn went and got baptized again, maybe we could talk.

“Doing it with Glenn may work on a short-term basis. I could see us getting together and lining up a bunch of big festivals and a bunch of big shows. But then, when you think about it, where would it leave you when you’re done? It wouldn’t leave you in a position where your credibility would be half as good as it is. Sometimes it’s better to be small and secure than it is to be extremely large and totally volatile. And I think our fans are owed the respect of one thought and one vision, and it’s not a parade or a circus for the rest of the world to throw money at. I’d rather be touring happy than rich and miserable.”

Speaking to Eric Blair of “The Blairing Out With Eric Blair Show” in November 2010, Only had the following to say about Glenn Danzig: “I like Glenn; I never really disliked Glenn as a person. But we do have a lot of influence on people and I won’t — for profit or for fame — jeopardize the safety of my fans to make money and to promote something that I don’t think is right for them. Glenn got into this whole Satanic outlook and I wouldn’t throw that on my kids and I won’t do that. If Glenn wants to go to church and repent, I guess we’re good to go.

“I don’t think Glenn is the devil, and I think he kind of promotes himself as the devil, and, to me, that seems absurd. It just seems to me that if kids are buying all this crap, it’s like [he’s] marketing something that shouldn’t be marketed, in my opinion. I’m not about that. I was brought up totally Catholic with my grandmother. I see these kids at the show — they look up to me. We keep a clean program; we don’t party, we don’t drink, we don’t have hookers in here and all that stupid shit. We’re a family band, and we kind of keep the American dream nice and solid and real. And the kids like that . . . I’m not saying that Glenn is anti all that stuff, it’s just that when you have albums [with titles like] ‘Son Of Satan’ and all this kind of stuff, it’s a message that a lot of kids may take the wrong way and a lot of kids may get hurt because of it. And a lot of kids may argue with their parents over the subject matter that they’re bringing into the house and have a bad relationship with their folks. Why? Is that something I would want to impose upon them? Make them have a bitter relationship with their parents over my music? No.

“The thing is you can go see a horror film — something really gory and bloody and all kinds of stuff — and have a good time with your friends. It doesn’t mean you’re gonna behave as such. And that’s the difference between me and Glenn — Glenn is trying to impose the behavior aspect upon the people in real life. And thing is we’re a sci-fi band — we’ve got subject matter from here to Kingdom Come — and we don’t need that.

“Glenn‘s very talented. I don’t think that musically we’re in the same zone anymore. But look, I’ve got a lot of respect for Glenn. I always thought that Glenn had a lot of talent. And I just think that Glenn… I don’t wanna say he’s misguided, but I think that he’s got a message that’s not productive for the people who get it.”

In a 2008 interview with Riverfront Times, Danzig stated about the possibility of a reunion of the original MISFITS lineup: “It’s not gonna happen… People had talked about it. But nothing ever happened with it… It never even got beyond a talking thing, you know what I mean?”