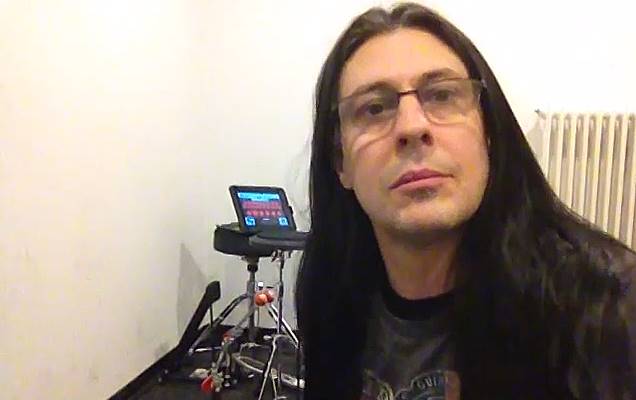 Video footage of drummer Mike Mangini of progressive metal giants DREAM THEATER warming up before a show on the band’s current European touir can be seen below.

Says Mike: “I have had to jump on stage with little or no warm up at for the first three weeks of this DREAM THEATER tour. Whipping into ‘Enemy Inside’ and ‘Shattered Fortress’ cold is quite a hit to the body.

“This warmup I do is a way to practice polyrhythms and also tighten up the unison playing of my limbs. 12 fast double-kick notes fit in a click. My right hand designates every 19 of every other of the 12 notes. I work with some or all the odd numbers from 19 to 3 when I have time.”

He adds: “During one part of ‘Illumination Theory’, my left side does a simple 3/16 pattern while the right side switches through about 7 time signatures (depending on the interpreter). By practicing large groupings like 19/16 down through 5/16, it makes that song section pretty easy to manage and to hear as an 8 bar melody in 6/8 time.”

In an interview with Myglobalmind, DREAM THEATER guitarist John Petrucci stated about Mangini: “We auditioned a lot of great drummers [back at the end of 2010]; every one of them was world-class. We had a lot of fun playing with each of them and had some great jams. With Mike, it was just something really special about what was going on. First and foremost, with everybody, we wanted to see if they can pull off the songs, play them correctly, and that they it felt right musically. That’s something Mike did; it felt like the band. He really gets the style and delivers in a powerful metal way. He has all the techniques, chops and sensibility; everything just flows musically. Over and above that, there were a few things, like his attitude and dedication to wanting to get everything exactly right, as well as genuinely wanting the position. Not just wishy-washy, ‘Yeah, if I get it, great. If not, OK too.’ Personality wise, we are all kindred spirits. I’ve said this before; if we ever went to high school together, we would have been friends. He is just one of us. We felt that immediate connect. He the right fit on every level.”

Speaking to The AU Review, DREAM THEATER keyboardist Jordan Rudess stated about having Mangini involved in the songwriting process for the band’s new, self-titled CD: “Well, it was really interesting having Mangini there for the whole process. One part of the situation was that he’s a very upbeat, energized guy, so just having that personality in the room with us was a good experience for all of us. On a musical level, you know, Mike has one of the most incredible rhythmic minds, I think, of anybody. So he was kind of able to conceptualize these kind of concepts that we would just take and try to compose around. We got some really interesting results form doing that — it was fascinating for us because everyone in DREAM THEATER has a good sense of rhythm, but we never before in our history have had this kind of input where someone would say, “Petrucci, if you play a bar of seven ten times, and Jordan, if you repeat something in five and I play this, it’ll all come together” — you know, we would all just smile, because it was some pretty cool wacky stuff that was just purely conceptualized by Mike. And, you know, I guess what helped the most with the writing process was just his drumming — you know, having him be there for the writing, so we could try something and have him do his thing on the drums which would lead us to compose differently.”