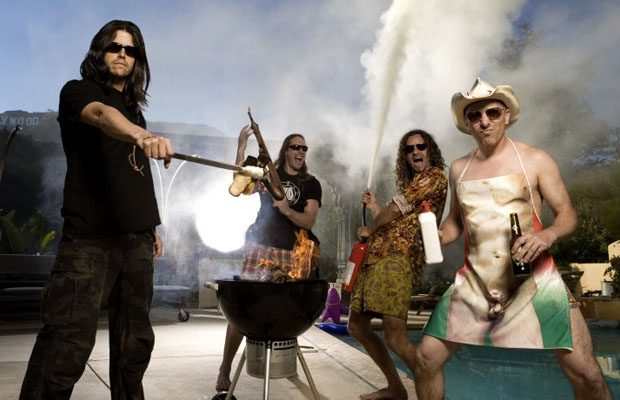 TOOL has released a statement to RollingStone.com explaining how a misunderstanding between the band’s guitarist and a fan led to speculation that the group had completed its new studio album.

“Last night, Adam Jones, in a private conversation with fans attending the Portland TOOL concert, joked that the band’s new album was not only finished but coming out the next day,” the statement reads. “Unfortunately, his off-the-cuff joke was taken out of context. Work on the forthcoming album is ongoing and as soon as it is done, trust me, we will be the first to let everyone know.”

Jones posted a message on his Twitter profile stating, “FYI, ‘The record’s done and it’s coming out tomorrow’ is what I said yesterday, followed by ‘just kidding. . . ‘”

TOOL kicked off its spring tour at Veterans Memorial Arena in Spokane, Washington on Tuesday (March 4) with a two-hour collection of fan favorites but not a single new tune in sight. According to RollingStone.com, the Los Angeles band opened its set with “Hooker With A Penis” and blasted through hits like “Vicarious”, “Schism” and “Jambi” before ending with the triple knockout of “Forty-Six & 2”, “Ænema” and “Stinkfist”.

The instrumental members of TOOL have acknowledged working on new music for a large portion of the past year, but have yet to give any sign that they are ready to hit “record.”

Keenan has kept himself busy with his Arizona wine-making business and his band PUSCIFER, along with doing some live work and a little new music with A PERFECT CIRCLE.