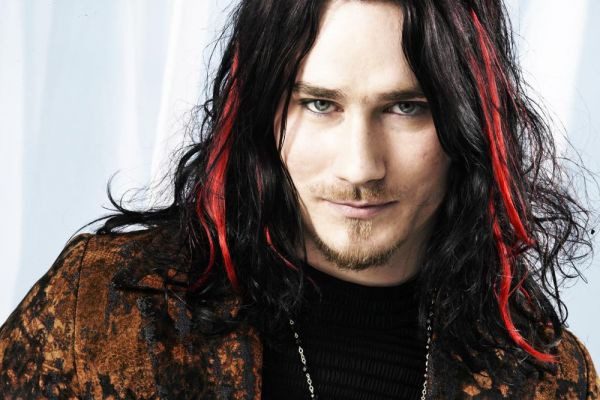 Niclas Müller-Hansen of Sweden’s Metalshrine recently conducted an interview with Tuomas Holopainen, the keyboardist and main songwriter of NIGHTWISH. A couple of excerpts from the chat follow below.

Metalshrine: What’s the plan for the next NIGHTWISH album?

Tuomas: I have given myself some schedules and I should have all the songs ready by the beginning of May. I have nine songs now and Marco [Hietala, bass/vocals] just visited me about a week ago and gave me a CD full of riffs. We’re almost there and we’re looking at 12 songs all together. We will all get together on July 1st in my hometown and we have rented this beautiful camp site for three months. It’s actually where we did the previous album, so it’s the same place for three months to rehearse, arrange, fish, water ski, record, get drunk and if everything goes as planned, the album should be ready by the turn of the year.

Metalshrine: Does recording an album in the middle of summer in any way affect the sound, compared to record it in winter time?

Tuomas: It must have something to do with it. I don’t know about the recordings because you’re inside a room either way, but as a songwriter, I can’t do anything in the summer or in the evenings. It’s funny, I almost always do all of my songwriting in the morning or in the afternoon, so when the clock strikes five or six, I’m done. [Laughs] And the band is called NIGHTWISH, go figure? [Laughs] I’m a morning person and I love to get up early.

Metalshrine: Those 12 songs you mentioned, how long does it usually take to turn them into finished songs?

Tuomas: It’s really hard to measure it, because the songs are in process in my head all the time. Some of these songs for the next album were already born two years ago. Let’s say it takes about half a year to a year of 24/7 songwriting for me personally to get everything done.

Metalshrine: What does [new NIGHTWISH singer] Floor Jansen bring to the album?

Tuomas: She brings a lot of interpretations, some arrangements and positive energy for sure, but she’s not included in the songwriting process. She told me that the first time around, she has [her side project] REVAMP and Marco and I will do just fine for now.

Metalshrine: What is it about NIGHTWISH and female singers? Is it a chemistry thing?

Tuomas: Yeah, something like that. I don’t wanna go too deep into it because it’s just a never-ending story, a never-ending carousel. Maybe there’s just a little bit of bad luck involved as well.

Metalshrine: Could NIGHTWISH ever have a male singer?

Tuomas: No, I think it has to be a female singer. It’s such an essential part of the band and what the band is all about. It’s been there from the beginning and the moment I formed the band back in August 1996, I knew that it was gonna be a female singer. That’s never gonna change.

Metalshrine: It’s almost 20 years ago. Been a fun ride, I guess?

Tuomas: Yeah, lots of ups, lots of downs and everything in between. Sometimes it feels really weird, like, “What the hell’s going on?” I just finished reading Rex Brown‘s [PANTERA, KILL DEVIL HILL] book and other bands have similar problems. We’re minor league compared to some of them.

Metalshrine: It really doesn’t come as a surprise when you’re in a band. You spend a lot of time together, compared to the time you spend with your co-workers on a regular job.

Tuomas: Absolutely. One more thing, and Marco put it really well. We look like we’re a bunch of neanderthals against ladies, and I guess it’s what it must look like, that we’re a bunch of chauvinist pigs or whatever, but the fact is that the band is full of males who have had relationships with females — our girlfriends, wives, sisters, mothers — our whole lives. Full of love and no conflicts and that’s all I wanna say. [Laughs]

Metalshrine: 12 years from now when you celebrate your 30th anniversary as a band, could you see all three singers on stage, doing something together?

Tuomas: Why not? Holding grudges and living with hatred is never good for anybody, so I really hope it happens some day. These kinda things take time.

Read the entire interview at Metalshrine.