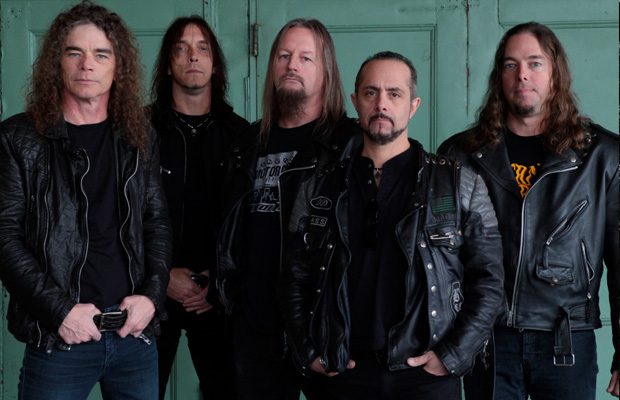 New Jersey thrash metal veterans OVERKILL have set “White Devil Armory” as the title of their new album, tentatively due in July in North America via eOne Music and in Europe through Nuclear Blast Records. Songtitles set to appear on the CD include “Where There’s Smoke”, “Amorist” and “Pig”. The effort is being tracked at Gear Recording and will be mixed by Greg Reely, who also worked on 2012’s “The Electric Age”.

Said OVERKILL in a statement: “We are still working on the new record, but this is gonna be worth the wait, with more old-school, face-melting thrash!”

Speaking to Steppin’ Out magazine, OVERKILL vocalist Bobby “Blitz” Ellsworth stated about the band’s upcoming album: “The new record has a blend of what we’ve done over the past half decade. I’m noticing it’s a more punchy heavy metal record with more dimension than the last record had. Where is it going to end up on the food chain? I really don’t know. But my feeling is it’s an eclectic collection of moments from us. ‘The Electric Age’ came across, to me, as kind of a two-dimensional thrash record. This one is punchy but has a whole different bunch of ways to go and things to hear on it.”

OVERKILL released a very special limited tour edition of “The Electric Age” in Europe on April 19, 2013 via Nuclear Blast Records. The limited 2CD tour edition included the regular album as well as a four additional live tracks on a bonus CD, recorded at The Metro in Sidney, Australia on September 25, 2010.