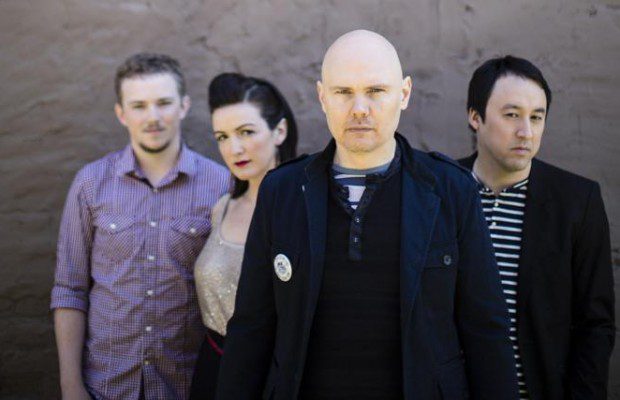 SMASHING PUMPKINS announced Tuesday, March 25 via the band’s social networks that they’ve signed an Artist Services deal with BMG. Via Martha’s Music/BMG, they will issue two new SMASHING PUMPKINS albums in 2015: “Monuments To An Elegy” and “Day For Night”. The first single is expected to be released by year’s end.

Recording sessions began this week, “as plenty of songs have been written and are ready to go,” said Corgan. “Manning the boards will be producer Howard Willing, with whom I first had the pleasure of working with during the ‘Adore’ sessions. We expect a single out by year’s end.”

Corgan also noted, “Additionally, this stands as the initial post on a new nexus: The Panopticon, which through its simplicity should better address the speed of modern life. A continuing feature, items regarding each day’s recording will be shared that same evening, with song titles, lyrics, poetic impressions, pictures, sound clips, studio gear and the like offered for a circuitous, bird’s eye view of the process as it unfolds.”

The PUMPKINS released their last studio album in 2012: “Oceania”, which entered The Billboard 200 chart at No. 4, earned the No. 1 spot on the Independent Albums chart and garnered vast critical acclaim.

SMASHING PUMPKINS have created one of the most acclaimed bodies of work in musical history having sold more than 30 million albums, and won multiple Grammy Awards in the process. Formed in Chicago in 1988, they released “Gish”, their influential and platinum debut in 1991, which was followed by albums including the nine-time platinum “Mellon Collie And The Infinite Sadness” and the four-time platinum “Siamese Dream”, as well as the platinum certified 1998 album “Adore”. The group’s many hits defined the alternative music era and continue to resonate on modern rock radio, influencing a whole new generation. The PUMPKINS returned in 2007 with their acclaimed sixth album, “Zeitgeist”. They have since remained on the cutting edge of music and technology with various online releases.