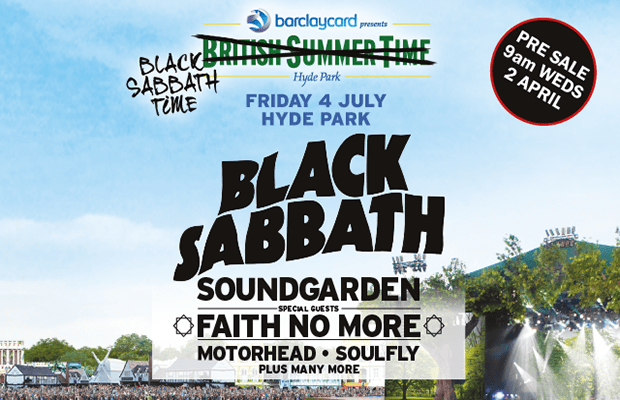 British heavy metal legends BLACK SABBATH are taking over Hyde Park in London on July 4 and will be joined by SOUNDGARDEN and special guests FAITH NO MORE.

After a triumphant return back on the rock scene last year, BLACK SABBATH are now thundering into Hyde Park to cast a night of darkness in what is set to be a bright summer. The legendary Ozzy Osborne and his bandmates Geezer Butler and Tony Iommi will be headlining the same stage that fellow rock legends THE ROLLING STONES presided over for two historic gigs last year.

Not content with just playing the park, British Summer Time becomes Black Sabbath Time! Announcing their show with an impressive takeover of the Royal Park, the band will blaze onto the Great Oak Stage in Hyde Park for their first-ever performance at the venue later this year.

Hailing from Birmingham in the late ’60s, BLACK SABBATH are the undisputed founders of British heavy rock. They have always undoubtedly been one of the best live bands in the world. In 2013, the band returned in the most triumphant style with a global number one album, sellout tours and a prestigious Classic Rock Living Legends award. From their first visit to London to record their debut album to selling out the O2 last year, the band have one ambition left, to melt the faces off the Hyde Park crowd.

As Ozzy says: “The first time I came to London, I didn’t have a pot to piss in, and I spent the advance I got for the first album on a new pair of shoes and some Brut aftershave. Returning almost 50 years on, we are doing a bit better for ourselves, so I may even splash out on some new aftershave before taking to the stage at Hyde Park, the most beautiful park in London that has opened its gates to so many legends in the past. We are beyond honoured to be allowed to put on a show and hope that the Royals will enjoy it!”

Support for the show will come from SOUNDGARDEN and special guests FAITH NO MORE.

Other artists to entertain throughout the afternoon include: MOTÖRHEAD, SOULFLY, WOLFMOTHER, GALLOWS, HELL, KOBRA AND THE LOTUS, BO NINGEN, RISE TO REMAIN and BROKEN HANDS, to name a few. The full lineup can be found at www.bst-hydepark.com.

WOLFMOTHER
HELL
KOBRA AND THE LOTUS
BROKEN HANDS
THE BOTS

RISE TO REMAIN
BLITZ KIDS
THE STRUTS
THE FIRST