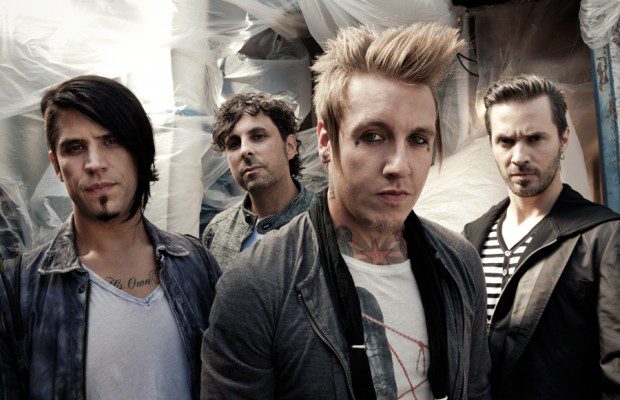 PAPA ROACH has spent the last few months recording its eighth album at The Hideout Recording Studio, owned and operated by Kevin Churko (OZZY OSBOURNE, FIVE FINGER DEATH PUNCH, IN THIS MOMENT). Speaking to Loudwire at yesterday’s (Wednesday, April 23) Revolver Golden Gods awards show in Los Angeles, PAPA ROACH singer Jacoby Shaddix said: “[We’ve been] in the studio working with the one and the only Kevin and Kane Churko, father-and-son production combo, and we are making the sickest, most illest P-ROACH record to date, guaranteed. It’s fiery, that’s how I explain it. It’s fiery. It’s like I’m holding a light orb in my hand and when I put it to the sky, I take off like a superhero, if that makes any sense. It’s for real.”

He continued: “We’ve got a song called ‘Just As Broken As Me’ that’s about forgiveness, when you don’t want to forgive but you know it’s the best thing to do. We have a song called ‘Never Have To Say Goodbye’. It’s about a really good friend of mine who passed away the last couple of years. It’s just my song … I never got to say my piece, and he was someone who really helped me when I was down and out and helped me clean my life up and then I went out there and lived that wicked life again, and when I was out there, he passed away. I’ve always had a hole in my heart from that so I decided to write a song about that.

“What else? I just finished another song called ‘Face Everything and Rise’, which is just the P-ROACH mode of operation, you know. That’s what I’m all about. It’s about stepping up to your problems and connecting with my God and walking through those things.”

Shaddix also spoke about his knack for putting himself out there for the listeners without holding back. “That’s just my spirit, man,” he explained. “The more that I put myself out there 100 percent and fully, the more that I find it humanizes me, makes me real and connects me with the fans of PAPA ROACH. That’s the most important thing and that’s what our fans love about what we do and our band. I’ll continue to do that. The more I shed the shell and be honest, it’s just great.”

Back in February, Shaddix spoke in an online chat about another new song, “Gravity” that “Jerry [Horton, guitar] was working on, and we all heard it, and we were just, like, ‘This just sounds cool,” he said. “It just sounds like the sound of us driving down this desert road.’ And it just sounded like the environment that we were in.”

Shaddix further explained what the song “Gravity” was about. He said, “‘Gravity’ is about what are the things in the world that keep pulling you back to reality or back down to the ground or back down to earth or back down to who you really are. And so that’s a great track. And for me, that was just something really different. I was, like, Jerry wrote the song, and I started lyricizing on it, and I was, like, ‘This song seems like it would be cool if I rapped on it.’ Everybody was, kind of, ‘Huh?! Really?’ And then I did it. And I remember I was just getting really painfully honest about some of the dark moments in my life that I never spoke about. I think that that’s when I really expose myself in the most vulnerable ways and step out of my comfort zone and really put myself out there, like, ‘You guys are gonna know this about me now?’ That’s when I think the best art is created . . . when you’re pulled the furthest out of your comfort zone. And that’s why PAPA ROACH records are so diverse.”

During the making of PAPA ROACH‘s latest album, “The Connection”, Shaddix split and reconciled with his wife of 16 years and also fell off the wagon.