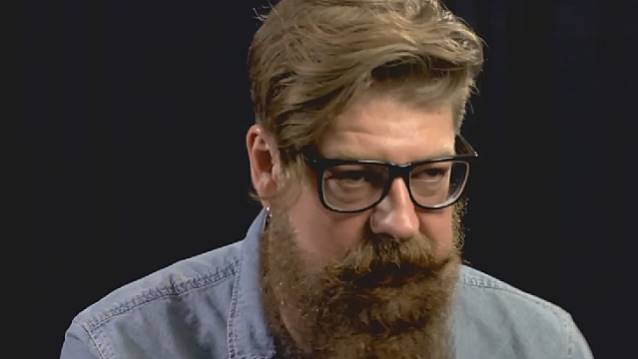 STONE SOUR has released the following statement regarding the matter: “As some of you might have heard by now, STONE SOUR and Jim Root have indeed parted ways. We were trying to wait until the completion of the new SLIPKNOT album, but in light of recent events, we are going to confirm this information and move on. We feel it’s best for both bands and hope that is reflected in the days to come. We will give you more information when the time comes.”

Taylor added in a separate tweet: “Jim and I are still working together in SLIPKNOT and the album is almost done.”

Root reportedly chose to sit out STONE SOUR‘s recent North American tour so that he could concentrate on writing music for the next SLIPKNOT album. The Pulse Of Radio spoke with Root and asked him to explain his decision in a little more depth. “You know, unfortunately I’m only one person,” he said earlier this year. “I can’t really be in two places at one time and the amount of focus that I need to put into SLIPKNOT makes it really difficult for me to be on tour with STONE SOUR. It’s crushing and it’s heartbreaking and I really don’t like the idea of not being out there, but I don’t really see any other way to really do it without… I mean, this is, like, the best way that we could come up with for a compromise.”

Earlier today, a fan who caught wind of the fact that Root will also be sitting out STONE SOUR‘s three U.S. summer shows scheduled for July 18-20 asked Jim on the guitarist’s Instagram account (where Root posts under the name stuperbee) if Jim was still taking time off from the group. “I’m not in that band anymore,” Root replied. “Not my decision. Not happy about it.”

Root was replaced for the month-long STONE SOUR tour with POP EVIL and STOLEN BABIES — which began on January 14 in Lake Buena Vista, Florida and wrapped on February 15 in San Antonio, Texas — by Christian Martucci (THE CHELSEA SMILES, THOUSAND WATT STARE).

In a December 2013 interview with the Minneapolis radio station 93X, Taylor stated about Root‘s absence from the most recent STONE SOUR tour: “We wanted to go back out with STONE SOUR and do one more tour — just kind of wrap things up, because we were pretty smoked by the time we got done with the European run, especially with doing both bands, that we all just kind of needed some time off. But we wanted to go out and kind of do one more cool, quick run through the States, especially, and play some stuff off ‘House Of Gold And Bones Part 2’ that we never got a chance to, and just kind of make it fun for the fans. So we talked to Jim — Jim was in SLIPKNOT mode — so we talked to him about bringing a friend of ours, Christian Martucci, out to play, and he was fine with it, everybody was cool with it. So this is just kind of a way for us to kind of wrap everything up before I have to jump off the ship and start working on SLIPKNOT stuff as well.”

Taylor and Root spent much of the last four years recording and touring behind three full STONE SOUR studio records, 2010’s “Audio Secrecy” and the double concept album “House Of Gold & Bones”, which was released in two parts in 2012 and 2013.