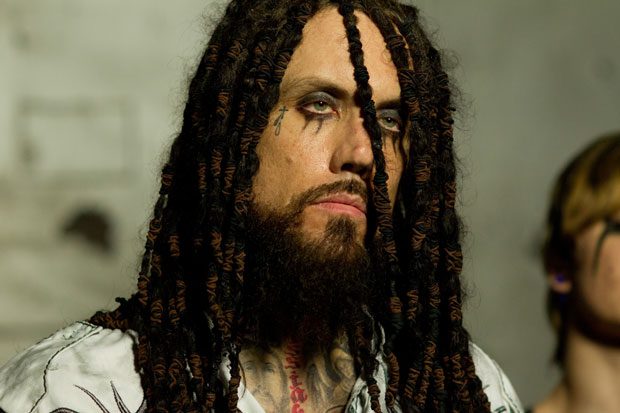 Matt Pinfield of Fanpass conducted an interview with KORN guitarist Brian “Head” Welch at this year’s Welcome To Rockville festival, which was held April 26-27 at Metro Park in Jacksonville, Florida. You can now watch the chat below.

Welch, a former drug addict and reformed Christian, spoke about what it’s like touring with KORN since rejoining the band in early 2013, eight years after first leaving the band. “I like to get high on something, and when I asked the Lord to come and make his home inside of me, the spiritual high, it’s so real,” Welch said. “And I hate religion — I don’t talk about religion at all — but the relationship through Christ is what I found. And I’m totally satisfied. Now I can enjoy raising my kid, I can enjoy jamming with music in KORN, I can enjoy anything I do. It’s the best high ever.”

As previously reported, Welch is getting ready to write his fourth book. Welch, who has three previous tomes to his credit, told The Pulse Of Radio that his new one will focus on the time he spent away from KORN between 2005 and 2013. “I call ’em like ‘the wilderness years,’ when I was gone in a way, raising my daughter and doing all that stuff for all those years,” he said. “And then, you know, getting together with the KORN guys again and — you know like my first book, like I told about my whole childhood and all the details and everything? I’m gonna do the same with this during like the mysterious ‘wilderness years,’ I like to call ’em.”

Welch‘s previous books include 2008’s “Save Me From Myself: How I Found God, Quit Korn, Kicked Drugs, And Lived To Tell My Story”, a young adult variation on that called “Washed By Blood: Lessons From My Time With Korn And My Journey To Christ” and 2010’s “Stronger: Forty Days Of Metal And Spirituality”.

Welch left KORN in 2005, got sober and embraced Christianity, saying that as a single father he did not want his daughter around the rock and roll lifestyle. “The last two years I was in KORN, I partied non-stop and started doing speed every day,” he said. “I got so addicted that I got scared. I tried to go to rehab, but that didn’t work. No one could help me. Then I ended up seeing if Jesus was real, and He instantly took the drugs away. He revealed Himself to me and gave me the strength. Once I figured that out, I knew I was accountable to God.”

Welch pursued a solo career for several years before rejoining KORN onstage in 2012 at a festival. He reunited with the group permanently last year and recorded his first album with them in 10 years, “The Paradigm Shift”.