SANCTUARY Completes Work On ‘The Year The Sun Died’ 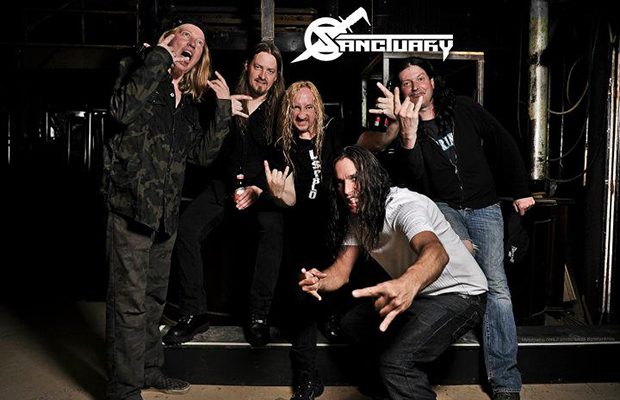 Reunited ’80s cult metal outfit SANCTUARY has completed work on its comeback album, “The Year The Sun Died”, for a September 30 release (one day earlier internationally) via Century Media. Recorded in Seattle at Soundhouse Studios with producer Chris “Zeuss” Harris (SOULFLY, SHADOWS FALL, HATEBREED, MUNICIPAL WASTE), the CD will feature 11 tracks and a bonus track, a cover of THE DOORS classic “Waiting For The Sun”.

Comments SANCTUARY singer Warrel Dane: “Now that hell has officially frozen over and the pigs have flown, I can proudly say ‘The Year The Sun Died’ is finished. The record that nobody thought would ever get here has come in kicking… and yes, there is screaming!

“Working with Zeuss (a.k.a The Commander) was great. He really pushed us all to be better.

“This is a very modern-sounding record with roots still firmly planted in old-school six-string metal and I gotta give him creds for that.”

In 2010, four of the founding SANCTUARY members — Warrel Dane, Jim Sheppard, Lenny Rutledge and Dave Budbill — came together for a few select reunion performances. At first, it was just going to be a handful of shows, but the response and chemistry on stage was so overwhelming that the guys changed their minds. Now, some 20 years after they left off, SANCTUARY has continued with its unique mix of U.S. power metal, hard rock and progressive elements.