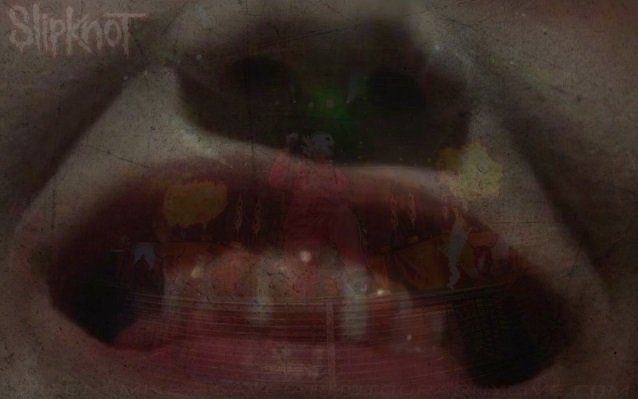 SLIPKNOT‘s official web site, Slipknot1.com, and Facebook page have been updated with creepy images and sounds in preparation for the release of the band’s long-awaited new album, tentatively due before the end of the year via Roadrunner Records. In addition, there are all-new graphics, including a new version of the nonagram.

SLIPKNOT has announced that the second edition of its Knotfest event will take place on October 24-26 in San Bernardino, California. The Iowa-based band will headline two of the three days, Friday and Saturday, playing a completely different set on each night. More than two dozen other acts are scheduled to appear, including FIVE FINGER DEATH PUNCH, VOLBEAT, OF MICE & MEN, DANZIG, ANTHRAX, KILLSWITCH ENGAGE, IN THIS MOMENT, HELLYEAH, ATREYU, SUICIDE SILENCE, MISS MAY I, TESTAMENT and many others. Friday night’s show will be exclusively for fans who buy VIP or camping packages.

With the long-awaited new SLIPKNOT album nearing completion, singer Corey Taylor told The Pulse Of Radio that the band did not want to announce any new live dates until the record was almost done. “After everything that happened last year, you know, we just basically said okay, what are we gonna do?” he said. “And everybody wanted to make an album. So we basically just cleared the slate and started looking at touring after we’ve got the album done. It’s gonna be with new content, with new music, with new everything, basically.”

Fans who purchase tickets to Knotfest will receive a digital copy of SLIPKNOT‘s new album when it’s eventually released.

The band will also stage Knotfest Japan on November 15-16 in Tokyo.

Taylor said that the new SLIPKNOT album is “98 percent done” in an interview posted by Loudwire. Taylor revealed, “It is very close. The next step is the mix, and we’re going to try to get it out very soon. There will be big announcements soon.”

The band’s first all-new album since 2008’s “All Hope Is Gone” will be its first since the 2010 death of bassist Paul Gray and the late 2013 dismissal of drummer Joey Jordison, both founding members and primary songwriters in the group.

SLIPKNOT is rumored to have recruited drummer Jay Weinberg to play on the new album. Weinberg is the son of Max Weinberg, longtime BRUCE SPRINGSTEEN AND THE E STREET BAND drummer.