Thrash veterans DEATH ANGEL will release “The Bay Calls For Blood – Live In San Francisco” on LP exclusively through Nuclear Blast mail-order on July 24th. The release will also be made available in the digital format and as a bonus CD with their upcoming DVD entitled “A Thrashumentary“. Artwork for the LP version was created by Joey James Hernandez.

“Joey James Hernandez has created designs for most of our tour merch over the past few years“, commented guitarist Rob Cavestany. “We love his style and felt it the perfect fit with this record!“

“Joey is also creating original art for the back cover and poster that will be included. We want to give our fans the full old school album experience with lots to look at while listening to the record, the way we used to check out music back in the day when it was quality over quantity!“

“We are a Bay Area band – and have always been proud of it. That’s why we recorded the album here and wanted the art to reflect where we’re from – in a brutal way of course! It’s a tribute to our home town fans. The city has evolved so much since we were kids growing up here. Unfortunately, swarms of parasites have invaded San Francisco like a disease and are sucking the life out of it in many ways. I envisioned an image depicting the aftermath of the eradication of these dot com techie scums!“

“The front cover depicts a disintegrated Bay Bridge while in the distance San Francisco lies in ruin. The ominous sky is the color of fire, the water blood red. The title is written in the blood of victims whose bodies have been dragged down to the second deck of the bridge, where their assailants plot the next attack…“

“I am not used to drawing atmospheres but when the boys at DEATH ANGEL asked me to do this, it was a no brainer to do it and challenge myself. Their visuals and music for this reminded and inspired me of ‘Mad Max’, ‘Chernobyl Diaries’, any bad dream or premonition we have of aftermath, strife and danger that still lurks in its ashes.”

“A Thrashumentary” was directed, shot and edited by Tommy Jones (KATAKLYSM, SOILWORK, LAMB OF GOD, CARCASS, TESTAMENT) of Videohammer Studios. It will be released on July 24th via Nuclear Blast Records. 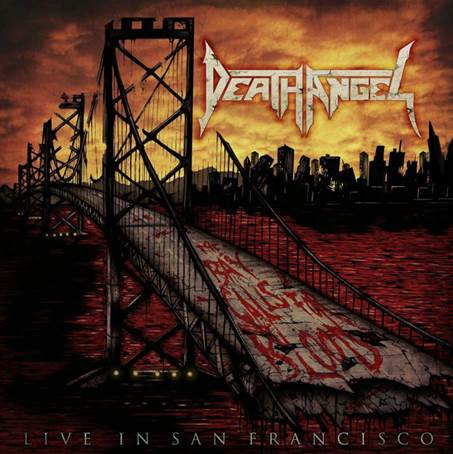