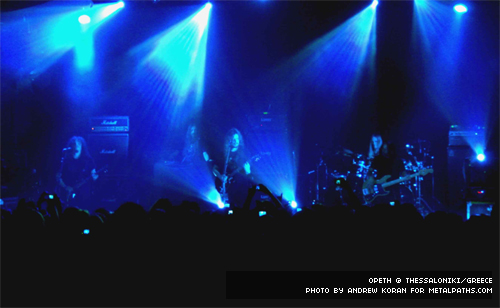 Having the chance to see Opeth  performing live, once in your life, should be described as a rather big opportunity to entertain yourself at all aspects.

I guess, a crowded venue such as Apothiki/Mylos, proves this in its all.

The doors of the venue opened exactly at 19:30, according to the schedule, and pleasant scenes, of people running up the stairs, to reach a “good” watching spot, occurred. To be honest, it was quite enjoying, to see such excitement or expectations from the crowd in this city, and after a while the screams “O-peth, O-peth” filled the venue and showed the crowd’s intensions.

After one hour and a half of last detail checks and irrelevant music entertainment, the lights go down at about 21:15, and the intro track is on.

While the intro track plays, the band gets on stage, all into position and the first chord of “Heir Apparent” starts the show.

Great choice for a beginning, and Opeth tight as a fist, play as a machine, but something is wrong. The sound is dim, and this goes on for the first half of the song. With a bit arrangement here and there, the sound clears up a bit, although it’s not at its best, as the performance of Opeth deserves. Second comes the “Ghost Of  Perdition”

and the sound is improved a lot, performance by the band great and the crowd follows every lyric filled with excitement. The song ends and now it’s time for some talking, where  Mikael Akerfeldt introduces us to “Godhead’s Lament” from the masterpiece album Still Life. Great song and performance once again and then follows “Leper Affinity” from Blackwater Park, where the crowd goes nuts. Third talking break and the familiar drum intro takes us to “Credence” which is followed by “Hessian Peel” and by now everyone smiles with joy. The band plays a great set and the high standards are everywhere.

A small break, as next comes “Closure” from the highly anticipated Damnation album, and at the end of it, the band starts a jam that changes the original song’s duration from 6 minutes up to 10.But something again is wrong, as the band seems to enjoy this, much more than the crowd, that seems confused I should say.

“Bleak” starts next with the crowd waking up and screaming like hell…Everything seems right, until a wrong drum-break leads to the sudden stopping of the song at about the second minute. Everyone on stage looks confused and the crowd starts to hesitate. Mikael Akerfeldt takes a talking break, trying to excuse Mike Axenrot by saying jokes and gradually introduces us to “Night and the Silent Water” from Morningrise album…First era Opeth songs such as this, are transformed with the addition of keyboards and the result is excellent, but the average age of the crowd does not welcome the song and seems to be confused once again, staring as if they didn’t know the song exists.

The last song from the first era finishes and “Master’s Apprentices” takes off…and so does the crowd!!!

New era Opeth  is once again at the frontline and a small pit is formed…Excitement and smiles everywhere. But after a while, Opeth stop once again, this time on purpose -or not?- after completing the first minute of the song.

There’s something going wrong for sure, with two songs suddenly stopped. Even if it was on purpose or not, the audience felt bizarre. I couldn’t get the meaning of this, but fortunately the last two songs balanced the whole result…

Mikael takes another talking break and announces the ninth complete song of the evening.

“Lotus Eaters” follows and the performance again is up to expectations. Perfection in its all, performance, presence and Opeth’s progressive death metal unfolds in front of an audience that smiles once again. The song ends and Opeth leave the stage, although the stage lights are still on. The crowd shouts “we want more” and soon Opeth are back on stage for the last song of the evening.

In a very calm music background Mikael introduces the band members, one by one and after saying some jokes about himself, he announces “Deliverance”…

Chaos follows and I believe it wasn’t my idea, that the sound in a magic way improved even more at the last two songs. Especially the last one. Headbanging metalheads and a perfect performance of the song close the night. The expected bow in front of the audience and another Opeth concert is finished…

Mixed feelings about the outcome, but somehow relevant to the mixture of Opeth’s music elements. Ups and downs that happily confuse you and leave you with the urge for more…or at least once more.