What do you usually do on a Friday night? Chilling in some bar with a bunch of friends? Or maybe relaxing on your couch after a working week? Well, as for me and another hundred people, we go to the shows. Washington’s metal heavyweights Darkest Hour were honoring us with their performance that night, and truth to be told we were more than stoked.

The band began as the conception of guitarist Mike Schleibaum back in 1995, experimenting with their sound for over a decay now, they can be fairly characterized as metal legends. They are notorious for on-stage ferocity, taut guitar interplay and enraged vocals that outline the hypocrisy and casual brutality of politics and society. Over the years they have toured with many influential acts, including The Dillinger Escape Plan, Soilwork, ZAO, Bleeding Through and others.

The task of opening the gig fell to Tardive Dyskinesia, progressive metalcore mob from Athens. Now, personally I have never heard any of their tunes, so it was pretty interesting to see what they’re up to. And yo, they’re up to much – explosive riffs deft mixed with a healthy dose of progressive elements powered up Manthos’s blowing vocals were landing straight to our mugs and made us wonder how the hell was it possible not to check this band out before. Playing for nearly half an hour they based the set on songs like “Soul Paramedics”, “No One Cares”, “Complicity”, “Triggering The Fear Reactor” (all to be found on their Myspace page) and managed to keep the ball in the air during the whole show. Still licking my chops, aye. 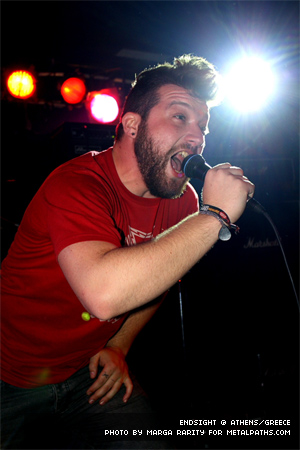 Next chums on the list were Endsight with more guts more energy and more metalcore. Boys did equip themselves well that night – rapid fire drum and impressively poignant riffages along with dementedly fast beats were unleashed to prove the fact, that those upstarts are worth keeping an eye on.

The crowd started to get adrenalized for good – headbanging, outstretched arms, random screams and yeah, pit. “The Knife”, “Before I Drown”, “Used And Controlled”, “As We Fall” were definitely the highlights of the performance along with frenetic moments of fans jumping on and off the stage and literally tearing the place apart. Furious stuff, indeed.

We were already informed, that DH’s flight is being late. It was 12.30 and the band still didn’t show up. Well, that sucked. We started to get a bit desperate, but by hearing people woohoo-ing and whistling I realized they actually came. Getting their instruments quickly ready and apologizing for the delay, dudes immediately got to the business, despite the tiredness due to a long journey from Russia.

Starting up with “Doomsayer” they raised the roof in couple of seconds, everybody rushed to the front with raised fists and madness in their eyes ready to maul anyone standing in their way. Storming favourites like “The Sadist Nation”, “Demons” and “District Divided” sent the mosh pit into a frenzy, while a response clearly bordered on hysteria. 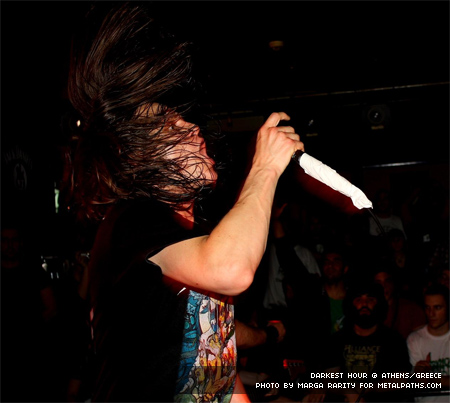 Vocalist John Henry was rushing around here and there sweeping the mic, jumping into the crowd, clutching at ceiling, twitching like a man possessed. Soon enough he was ready to statement the fact, that we are all “fucking crazy”, demanding to see some horns. The rest of the band wasn’t dropping behind at all, being a monstrous gut-moving blast, that grips and gulps all those warriors squeezed in the club.

Guitarist Mike Schleibaum contrived to climb up the drums couple of times, playing his solos with incredible skills. “With A Thousand Words To Say But One” closed up the set, but we weren’t willing to let them go that soon, yelling “WE WANT MORE!”. “You guys want one more song? Fuck that, we’ll play two more!” shouted John and the encore was successfully completed by “The Patriot Virus” and “Tranquil”, while those in the crowd looked as if they might breathe their last breath before the songs were out.

Peeling ourselves off each other, we bid the farewell to the band, being absolutely overwhelmed by their professionalism and passion, but mostly by one of the most furious and explosive sets produced in years. 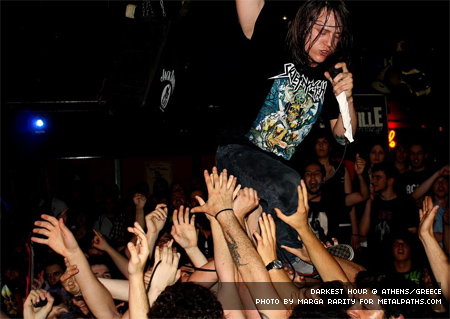 All members were chatting with fans after the gig, smiling and joking, looking every inch humble and down to earth dudes. As far as endings go, it’s impossible to find anybody who would have preferred being somewhere else that Friday.