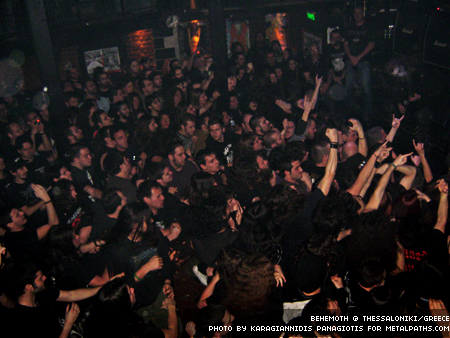 It was one of these nights, where in the end you leave the place with a big smile on your face, having the belief that your money were worth the spending and the wait you had to see such a concert. What brings me more joy is that apart Behemoth, all fans witnessed two great Greek bands kicking serious ass and proving that the scene in our country is raising its level as years pass by.

The direct playing and straight to your face deliverance of the goods they offer, makes us hope about a better future in the raising of metal music in a country that always used to kill its own children in many ways.

First to enter the stage were brutal technical deathsters Terrordrome, natives of Thessaloniki, having the best drummer of Greece in their group, not luckily called Octopus. Together with their steady and talented bass player, they were the driving force of this bestial machinery. Their guitar player produces massive insane riffs that lead to groups like Dying Fetus and Origin easily. His hand goes up and down so fast, that you sometimes distract yourself from the outstanding growler they have. His vocals are even more brutal than in the album. The played two new songs which will be released as a 7” and the first sample of what follows is phenomenal. Satisfaction guaranteed.

Mass Infection are also an experienced band, having their new second album ready in a fresh situation, released some months ago, it got the band a step higher than their debut. However, their live appearances are not affected at all, regardless the material. And this is proved on songs like the title track of the debut album ”Atonement For Iniquity”. Their sound was much better than Terrordrome and their music got better through the audience. Eight frenzied songs and the band in tremendous shape. What a perfecto combination of Vader and Malevolent Creation in terms… The future is bright for both bands. They know what they want and how to get it. Well done to both of you! 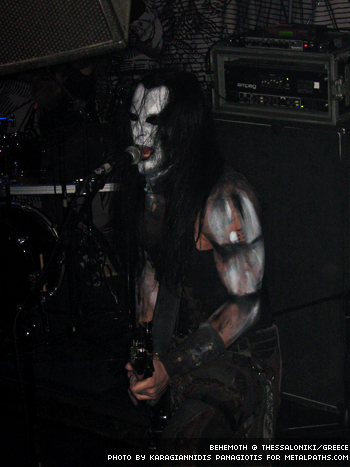 Then everything got darker and the Polish assault of Behemoth began with their newest hit ”Ov Fire And The Void”, at first the crowd got frozen just before outbursting into screams of ecstasy and redemption. Next was the title track from the very well achieved ”Demigod” album, but this seemed to be just the warm-up for what was to follow. The affinity of Nergal on ”Shemhamforash” was something that few people have the opportunity to see live, and as he was totally out of control, with no hesitation goes on to play ”Conquer All” and Eightball is definitely conquered, as 400 people can’t believe their eyes and ears.

Alongside Nergal exists a well built force, with Seth on his right supporting with his riffs the leader of the band, and the ready for battle rhythm section of catastrophic drummer Inferno (so comfortable playing, not even a drop of sweat) and the colossal bass player Orion who really was the best presence on the scene, hard as a rock and banging his head together with Seth in the same relentless rhythm. With such friends and allies, who gives a fuck about enemies and contradictors? The set included the great surprise called ”LAM” from ”Satanica”, a track that still proves its worth through the test of time.

Behemoth continues without mercy on favorite tunes such as ”As Above, So Below” from ”Zos Kia Cultus”, shortly to be followed by one of the most brutal tracks in music history, ”Slaves Shall Serve”, where everybody is freaking out, mumbling hard to understand words and heads go up, down, left, right, sideways and backwards. All directions that is. That doesn’t mean that things ease, and ”At The Left Hand Ov God” completes the unholy trinity of these blasphemous heretics.

A short drum solo by Inferno follows as an intro to ”Alas, The Lord Is Upon Me” from the latest ”Evangelion” album, for which Nergal told us who proud he is. 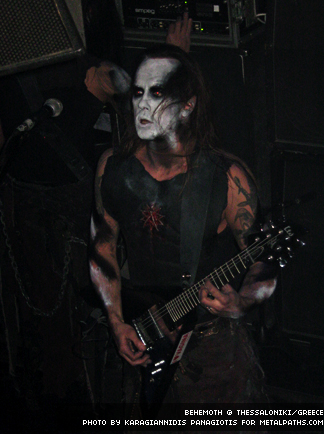 Then the other surprise that followed was ”Antichristian Phenomenon”, a track I didn’t expect them to play and was surely welcome. Next was the moment all Greeks were waiting for. ”I want you malakas sing your guts out on this because you all know it: APO PANTOS KAKODEMONOS!” is the chant of Nergal and ”Decade Of Therion” tears up the air and heads explode leaving victims on the ground.

But this is not the end because ”Chant For Eschaton” is presented and it whistles through the hall a grim and rolling riff that was the end of the normal set. Until it was time for them to return under the demand of the fans.

Last but not least was the final track from ”Evangelion” called ”Lucifer”, a triumphant ending to a glorious live experience, with Nergal wearing his custom made mask looking like a minion in The Fallen One’s army, convincing in his every word and closing the song like a ceremony, where in the end they drifted away slowly like nothing happened the previous 70 minutes.

All in all, the band is in its best shape ever, with a great album as a package for which they do everything to promote. And you can tell what they do is pure brutality, they don’t pose, they don’t need to overreact. They just blast everything they can. Quality is the hidden truth here and if you want to do a favor to yourselves, don’t miss them live for the world.