After passing through various tests of inner strength, health problems etc. and after two personal records (Dane’s Praises and Loomis’ Zero..) Nevermore managed to remain and bring themselves back to a state of creation by putting out “The Obsidian Conspiracy”. Their 7th full length release after five years of abscent new material. Just five days before its official date release, their “Conspiracy Tour” lands on Principal Club Theater. 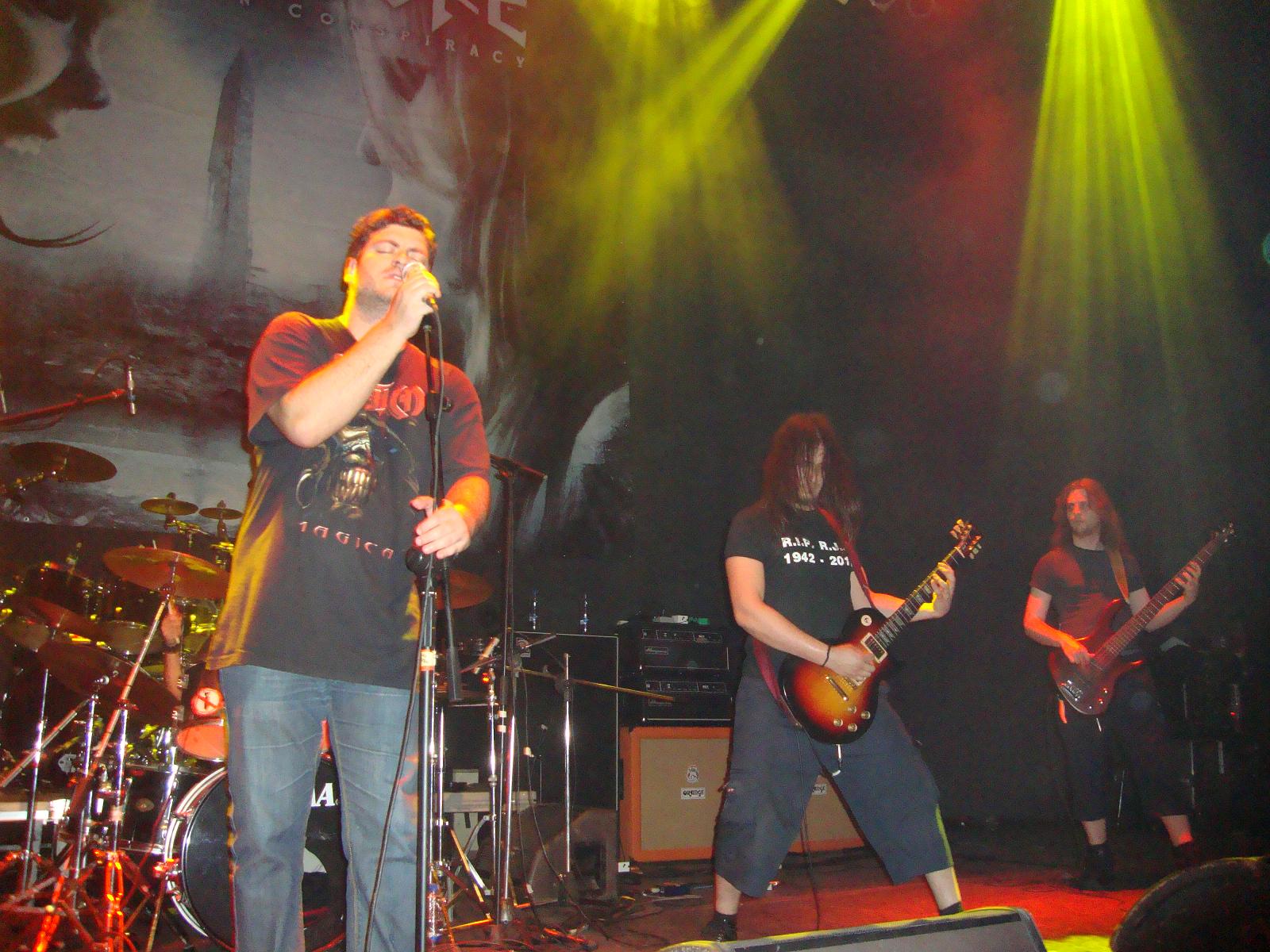 The doors were open to the audience, soon enough to be present to the local band that supported them. Rex Mundi(GR), which have just finished their first full length attempt(in terms of mixing), presented songs from their Demo and their soon to be first full length. Unfortunately, I hadn’t had the chance to watch their appearance, because I had to prepare myself for interviewing Loomis backstage. So, I will just say what some mates told me of their presence on stage, “a nice local band that warmed up the audience, although they played less than 40 minutes set”.

During Rex Mundi’s final song and after having talked to Nevermore, that seemed excited for the show, I walked upstairs to the foe and waited for another great appearance to take place in front of my eyes. It had been long, since I had seen them live and my expectations were quite obvious, since they had this new guy Attila on guitars. What could they sound like? The setlist, performance everything…

It was about 22:00 when the lights went off and “Ophidian” introduced everyone on stage. The thirsty crowd of mostly youngsters -I should mention- going nuts and “Beyond Within” kickstarts Nevermore’s setlist with pits, sweat and singin’ along in the middle part. First song, and I’m watching Attila playing Loomis’ solo. I can’t say I’m not impressed, although I was almost sure that the one they would have with them, would surely be another shredder. Well, this guy is not only a shredder, he is a smiley headbanger that has fullfilled a lifetime dream, being on stage with his favourite band and he surely enjoys every part of it, to the maximum. Second came “River Dragon” with the guitar solo duel performed perfect and Van Williams always a big part of Nevermore’s unique sound hitting with confidence and precision, as if there’s no turning back. Brilliant start! 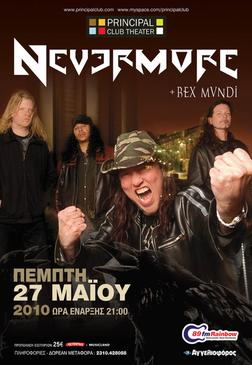 Third song and it’s time for a new track! “Your Poison Throne” that seemed catchy enough to “rise” everyone to a wild mosh pit, maybe one of the new songs that will be a concert must from now on. “Born” follows in crowd delirium, of fists flying and bodies smashing. After four songs, I can’t say I can hear Warrel’s voice as it sounds a bit lower in the mix, with the crowd backin’ every lyric, as loud as they can. Second fresh song “Emptiness Unobstructed” is another strong refrain song, that surely claims a lifetime place on their future setlists, with the crowd contributing willingly to a loud sing along. Next comes “Inside Four Walls” and chaos is the word that can describe, what happened among the crowd. Although, this was the first of the songs that made me think I’m in a concert of a band that exists since 1995 and their sixth song in setlist, comes from their close past (if 2001 can be considered closed past).

“Tomorrow Turned Into Yesterday” follows slowing down the rhythms and another sing along Nevermore “ballad” gives place to “Termination Proclamatioon” opening track of “Conspiracy”, which brought back chaos to the crowd, although I can hardly hear every word Warrel sings. “This Godless Endevor” which follows proved as the air guitar favourite. Precision, difficulty and top performance give place to another concert must –as it seemed- and that’s no other than “Heart Collector” the ultimate sing along and waving hands’ song…Although, I’m not sure if I can be confident to the idea of a Nevermore waving hand song, but as it seemed this is such one. Thanks for the triple attack that followed “Seven Tongues of God”, “Narcosynthesis” and “Engines Of Hate” everything came back to the familiar chaos. After leaving the stage for a while, Nevermore come back with “The Obsidian Conspiracy” and “Enemies of Reality” to finish off every remaining head and body in the crowd.

Summing up this first meeting in years, I could say that Attila is the man, headbanging communicating interacting with the crowd surely deserves the job. Nevermore, were as always energetic and seemed to enjoy every crowd response, but this setlist did not quench every old fan’s thirst for past material. Is this a new era for the band? Everything will be clearer in a few months’ time, for now everyone enjoys his/her “Conspiracy” until the next meeting.