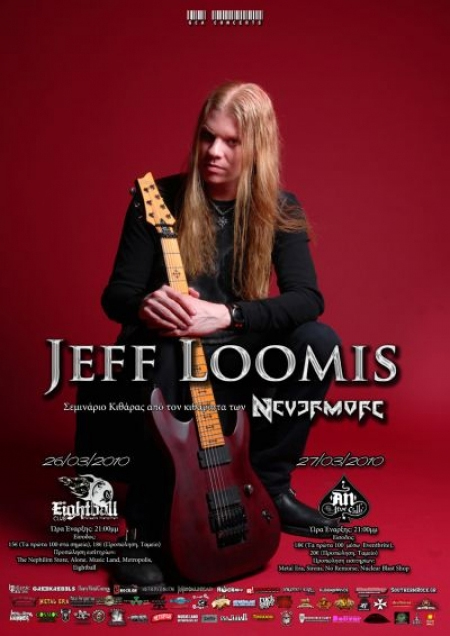 I consider Jeff Loomis easily the best metal guitar player the last 15 years. Maybe more. His crushing riffs and his unbelievable solos have smashed my neck many times due to relentless headbanging, mainly caused by his skills. The legendary guitarist of our beloved Nevermore made a station in Greece to play a guitar clinic and answer questions of fans about his work, his technique and his influences in general. Calm, friendly and smiling, Jeff didn’t refuse any request or question from the fans and once again he stated that the Greek fans are the best. Not because he was here but because he certainly believes it.

He started his lesson with the initial song from his first and masterful solo album ”Zero Order Phase” called ”Shouting Fire At A Funeral”. Amazing technique, fingers that cause fire on the scale and relentless riffing by the blond-haired shredder. He also played the title track of Nevermore’s last album ”The Obsidian Conspiracy” and then he answered some questions. He stated that some of his main influences were Marty Friedman and Jason Becker and he doesn’t know anything about music theory. He just feels blessed because whenever he heard a melody on TV, he could play it in a few seconds. Now, if this is not a gift, what is it?

”Jato Unit” is one of the most popular songs of his album, so it couldn’t be missing, and it was followed by ”Your Poison Throne” off of the last Nevermore album. Some more questions he answered were about his way of playing. He believes that it’s better to focus on the power of the wrist while playing and not just get your hand up and down sloppy. Also, he said that his way of writing songs doesn’t get affected by Warrel Dane’s voice. He always has a main idea and Warrel brings the lyrics, so the final result is brought up by the chemistry of the two partners who have given us many great songs in the past.

Jeff encouraged the crowd to participate on ”Enemies Of Reality” which will always remain a classic must song in every Nevermore gig and he also played the final section of ”This Godless Endeavor” which made us all just observe without being able to say a thing. Some of his favourite guitarists for their way of playing? Dimebag Darrell of Pantera for being an originator as he said and Fredrik Thordendahl of Meshuggah for his diverse way of pulling the strings up and down. He tried to show the people how he does it but he said he can’t even imitate him.

In the end, he played ”Miles Or Machines” from his solo album and he answered some more questions. One of the most interesting parts was that the solo of ”The River Dragon Has Come” from ”Dead Heart In A Dead World” is inspired by the song ”Sword Of The Warrior” off the Cacophony album ”Go Off!”. He thanked all of the fans, he signed numerous autographs and he left the place smiling. As he said somewhere in the end, the ones wanting to buy a great 7-string guitar, should prefer the Jeff Loomis model by Schecter. Nice to see you once again good friend, I hope we meet again in the future.