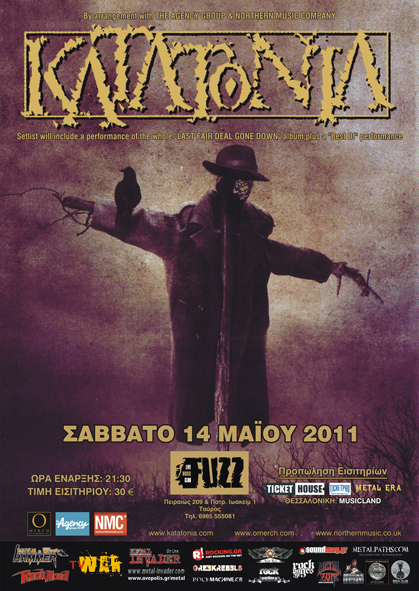 So, after some many days of undeniable waiting I finally arrived Fuzz Club a few minutes before 9.30 the time that concert was arranged to start. The venue was fairly enough filled with people but fortunately not in a grade that you couldn’t see or breathe basic element for enjoying a concert. A quarter to ten Katatonia started their “Last Fair Night Gone Down” set list. At the beginning the sound was not their alliance as “Dispossession” seemed to be a little bit dense but hopefully things became better than expected for the venue history. The audience seemed to adore this album as you could easily distinguish everyone singing songs such as “Chrome”, “Teargas” and “Clean Today”.

Furthermore , the two new live members of Katatonia Per “Sodomizer” Eriksson ( Guitar ) and Niklas “Nille” Sandin ( Bass ) seemed to have fit so good with the other band as their smiling faces and their constant headbanging approved their joy and pleasure for playing live with Katatonia. While “Future of Speech” was one of the highlights of the first set list, “Passing Bird” and “Sweet Nurse” created a really nice romantic and relaxed atmosphere. And then there was time for the first end of Katatonia’s show with the excellent implementation of “Don’t Tell A Soul”.

Moreover, after a fifteen minute break, Katatonia returned to stage to celebrate twenty years of vital existence with an unexpected surprise. I couldn’t believe my eyes when I saw them playing “Brave” from the godly “Brave Murder Day”. Jonas seemed to still have it on brutal vocals as he sang every single lyric with such passion and emotion. In the continuation, “Nefelim” from last years album “Night Is The New Day” was there to give another tone of Katatonia’s early beloved career . “My Twin” was next to makes matters even better and us singing along for a lost one. Another, totally unexpected was “I Break” from the “Discouraged Ones” which described the feelings of the hurt. As for the songs, “July”, “The Longest Year ” and “Forsaker” were one of the best moments of the concert and also showed us how tight band was and how much they loved what they were doing. Not to forget to mention that , Blackheim is really a respectful personality and guitarist adding his own personal style of what Katatonia is doing along with Daniel Liljekvist who is great and really strong drummer ( He also cut the leather of the bass drum during the live ).

In conclusion, it was surely a fantastic live and a great performance .Everyone enjoyed themselves and especially Katatonia. It would be very nice to see them in the near future and not necessarily with Katatonia (Horns Up For Bloodbath Tour)

Best Of :
Brave
Nephilim
My Twin
I Break
Right Into the Bliss
The Promise of Deceit
Wait Outside
The Longest Year
July
New Night