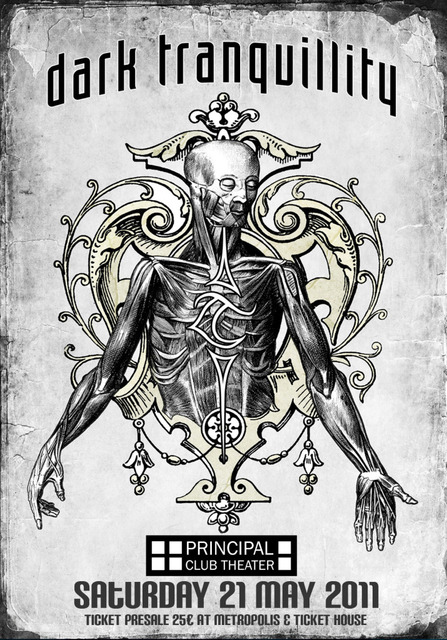 Sixth time in my life that I had the LUCK to see the talented Swedish band from Gothenburg. Each time seems like the first one, their evolution is remarkable and they seem even younger, no matter if they have reached their 36-37 years of age. It was also the first time to see them with their new bass player Daniel Antonsson, who seems a perfect fit, I really loved Michael Nicklasson a lot, who filled the bass duties for ten years. But the new guy is trully amazing, plus he adds some more hair on the stage (that was a joke of course). For the next 80 minutes, we listened to 17 tracks and despite the absence of tracks from my favourite ”The Mind’s I” album and with ”Punish My Heaven” being strangely omitted from the setlist, we dealt with their best live performance in Greece. No shit about that.

Vain Velocity was a band I didn’t know to be honest, but they managed to get my attention. They told us they just released their first album, from which they played seven songs, lasting 35 minutes in total. Their style could be described as modern metal, with a lot of groove parts, reminding most recent bands but having their own identity. Very good sound and trully great vocal performance by the singer, growling as much as he could without forgetting to deliver some clean parts inside the songs. Great combination between the guitar players, with one following the riffs of the other and the rhythm section sounding like crystal. They gained the impressions and received the applause of the crowd fair enough.

Scar Of The Sun was a band I saw last year, opening for Pain Of Salvation. It seems that the Swedish groups fit them and bring luck to them. They played six songs for half an hour from their debut album ”A Series Of Unfortunate Concurrencies”, where they have a duet with Mikael Stanne of Dark Tranquillity, only this time they were helped by a fellow of them with a great vocal presence, being the best part of their setlist. They also had a good sound and the gap between them and the headliners passed pleasantly, though I can’t decide why they don’t cause me as much attraction as I’d like. Their music is well played but again, I feel like something’s missing. When I find out, I’ll tell you. But they were surely better than the first time and have really done a hard work to reach that point. Time will tell occasionally.

Little is to be said about the headliners of the night. Promoting their latest album ”We Are The Void”, they started the show with ”At The Point Of Ignition” and ”The Fatalist”, before they return to the previous album ”Fiction” to play ”Icipher” (standout track, great surprise). Continuing with tracks from the recent past such as ”Damage Done”, ”Lost To Apathy” and ”Monochromatic Stains”, they drived the fans crazy, making them sing even in the gaps (ooooo…) with Stanne having the smile of Joker in his lips and the rest of the band trying to seem professional but getting caught to the vibe and smiling too at many points. ”The Gallery”, ”The Wanders At Your Feet”, ”Iridium” (another great surprise, one of the best new tracks), ”Focus Shift” (pandemonium!), ”Dream Oblivion” and ”Misery’s Crown followed, on which Stanne couldn’t help but diving of the stage to the crowd. An amazing moment, showing how much they wanted to return to the city of the Greek north.

The title track of ”Haven” prepared the ground for the heartbreaking and breathtaking ”Lethe” (Stanne always loses his mind on that, this time he seemed as if he would eat us alive), before ”Final Resistance” set fire on our necks and leave a little space for the encore, with ”Therein” marking the great presence of the fans who didn’t stop singing, and with ”Terminus (Where Death Is Most Alive)” being the last track of the night, we really couldn’t believe our eyes and ears. The band thanked us in great mood, promising it won’t take any other three and a half years to return again. With the drawbacks mentioned above and still unable to get over it, Dark Tranquillity can really be described as a unique jewel in the box case of valuable metal acts of the past, present and future. I can see them live every day for sure. I hope next time won’t take long. Until then, we’ll just wait for the new album. Enter suicidal angels…