Another time we had the chance to see a great package consisting of death and black metal bands in these difficult financial times. It seems that some bands don’t care if Greece is under crisis, they just do their thing and come to give their gigs for the fans. As far as Marduk are concerned, I can’t remember how many times they have come to play in Greece, maybe it was the sixth or seventh time, all the other bands played for the first time in our country and hopefully not the last. The whole show started at half past six as planned and ended before midnight, the organisation was once again nominable and the fans left more than satisfied from Kyttaro Club, which proved to be the ideal place for gigs in Athens once again, as all the bands had a great sound and we could listen everything clear without much distortion.

Forsaken World is a band from Nancy, France. They are not as technical and progressive as most of the French bands tend to be, they play a strange mixture of melodic death metal (based on the Swedish scene mostly) and groovy metalcore. If someone sees them for the first time, he’ll surely think they are a black metal band, as they come out in corpsepaint and fancy suits. These guys did all they could in front of a few people (classic Greeks rarely attend such shows from the very beginning), but they are surely searching to find the sound they want to play. Their debut album ”As Time Reflects Our End” was represented most of it and for half an hour, they tried giving a decent performance. They managed to do it but they were a little tiring and I think people will forget them soon enough. Maybe next time folks.

Heaving Earth was the only of the three support bands I was familiar with. Coming from Czech Republic, they play what you’ll surely guess: Brutal death metal, not like the one of their countrymates Krabathor though, but a little more intense. The new growler Michael has a great voice for the genre and was praised for his skills, alongside the remarkable drummer. They played stuff from their full-length ”Diabolic Prophecies” and their latest EP ”Redemption Ablaze” and on one of the songs of the full-length, the old vocalist Sepp did the vocals. They made a lot of people applause them and they surely won the impressions in their first performance in Greece. Later, I saw them watching the other bands among the fans, a fact that was greeted as something very positive. Czech Republic continues its tradition with brutal bands for sure.

Noctem from Valencia of Spain were the ones that replaced the New Zealand death/thrashers Sinate, which had to cancel their performance. Noctem are a very solid band which reminds of Behemoth in many parts. Intense blackened thrashy deadly metal with the band combining the three famous extreme genres, though their blackish approach wins in the end. The vocalist came out as a hangman of the past and they played tracks from both their albums, ”Divinity” and ”Oblivion”. Surely a worthy replacement for Sinate, Noctem never stopped banging their heads until the end. Like the previous two bands, they played for half an hour and they seemed that they enjoyed it very much. A tie between them and Heaving Earth on which of the two was better, I liked them the same and that’s something that doesn’t bother me at all.

Immolation on the other hand, had no opponent that night. Knowing they’re going to present a long set about 75 minutes, they start with ”Close To A World Below” and it’s clear we’re going to witness something spectacular. ”Swarm Of Terror” and the title track from ”Majesty And Decay” show that what we listen is real and ”Passion Kill” brings chills with its miserable structure (as Ross Dolan said, they’re masters in being full of misery). ”Father You’re Not A Father” is my favourite Immolation song, so I can’t say much of the joy I had in listening to it, their latest EP ”Providence” is represented with ”What They Bring” and ”Into Everlasting Fire” proves that two decades after its release, ”Dawn Of Possession” remains a death metal landmark, unaffected by time. ”A Glorious Epoch” sums up what Immolation are passing through in the end of 2012. ”Under The Supreme” from ”Here In After”, the title track of ”Unholy Cult” and ”Den Of Thieves” from ”Hope And Horror” EP follow without mercy and few can believe how great are Immolation on stage, compared to the albums.

”I Feel Nothing” continues the massacre and it’s ”No Jesus, No Beast” which creates chaos and a fiendish chanting ”Can you hear us? Death to Jesus” from all the fans. The title track of ”Dawn Of Possession” puts Immolation on the throne of the best live American death metal band (maybe worldwide also) and after fourteen tracks, where the band praised Rotting Christ, Sickening Horror and Raw In Sect, Greek bands they’ve travelled with in the past, their show was over. Robert Vigna delivered guitar lessons and Steve Salaty smashed his drum set where needed. Those who haven’t seen Immolation live, don’t know what they’re missing. They’ve finished recording their latest album, promising it’s gonna be the darkest, heaviest, most miserable Immolation album ever. Can it get better than that? Who knows… 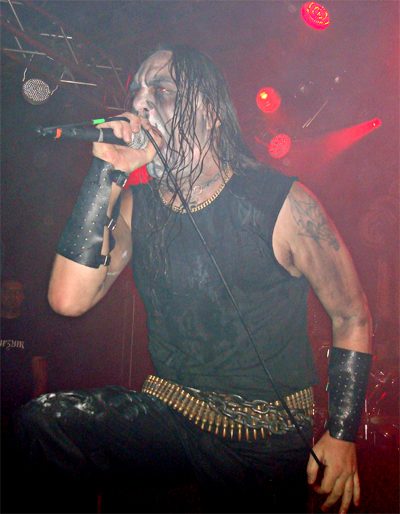 Marduk is a band that Immolation praised and are touring with them for the third time. It is true that after Mortuus came to the band, they show signs of improvement compared to the beginning of the ’00s decade. Evil on guitars is the trademark of the Swedish unholy blasphemers and the title track from the latest album ”Serpent Sermon” starts a black metal fury, continued with ”Nowhere, No-One, Nothing”, ”The Levelling Dust”, ”The Black Tormentor of Satan” (fury with no end), ‘On Darkened Wings” and ”Slay The Nazarene”. No matter if I like them or not (they were never of my taste to be honest), I can’t help but telling you that they are great live and they are worth the support of the fans of the genre. ”Temple Of Decay”. ”Throne Of Rats” and ”Deme Quaden Thyrane” keep things moving on and the band has a lot more to give.

”Within The Abyss” and ”Baptism By Fire” prepare the ground for ”Panzer Division Marduk” (surely their best album for me) and ”Souls Of Belial”, before the band returns for an ancore. ”With Satan And Victorious Weapons” and ”Wolves” closed the set and after an hour and a quarter, Marduk left the stage and the fans were exhausted. Fifteen tracks from a two decades career ain’t enough for some though, as there are people that wanted to listen to ”Still Fucking Dead” at least. No matter some complaints, they did what they had to do and it was one more night where extreme metal music showed its power. I wish there were more fans to attend the show, I used to live in Thessaloniki and complain about fans’ attendance in shows, but I see no major improvement now that I’ve moved in Athens the last four months. It seems people want the same things over and over (Anathema, Paradise Lost, Opeth and stuff). Let’s hope we’re going to have a nice live season. It has already started great enough though.