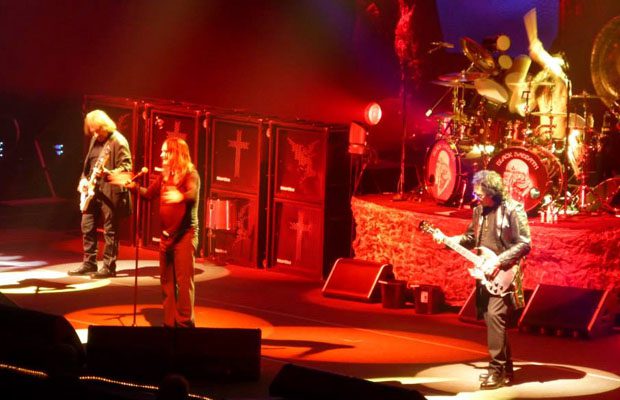 The Forum in Copenhagen is a venue that can hold 10,000 people and it’s an arena that I’ve visited fairly frequently the past 15 years. I have never seen the Forum be SOLD OUT… But when the godfathers of metal, BLACK SABBATH visit Copenhagen, the place is sold out. I honestly thought that there would be people left outside in the freezing cold that evening.

So the Sabs must have felt the warm welcome when the lights went out, the trumpet fanfare of War Pigs started playing and the lights lit up the stage and the crowd. There aren’t many iconic bands left nowadays so seeing the ultimate, original metal band, just when everybody thought that maybe the last train had already left the station, was pretty amazing.

But… let’s get the whining out of the way first, shall we? Just to get it over with so we can concentrate on the rest of the show. 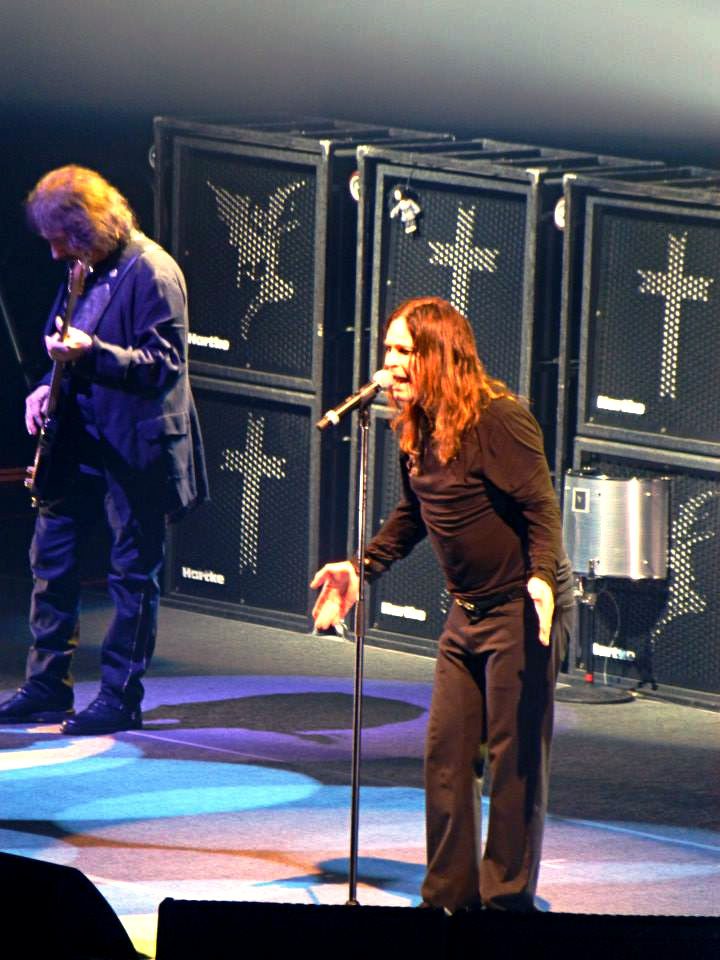 Ozzy must have left his voice back at the hotel, because at times it just sounded…bad. He was either way out of key or he was out of tempo (especially in the first few notes of “Black Sabbath” where he was already at the chorus while everybody else were still playing the intro…) so it’s safe to say that he had a bad day at the office.

Tommy Clufetos is an amazing drummer and entertainer, but he sticks out too much from the rest that it becomes a very apparent reminder that the Black Sabbath that we’re watching isn’t 100% a unity or the “real” Sabbath. It’s a solution. Musically, it sounds great, but visually Sabbath might have gotten away with the abscence of Bill Ward had they chosen an older dude to handle the sticks. Maybe.

And that would be my only reason to whine, because everything else was nothing but impressive. The stage show, the lights, the entire decor is as always simple but very effective.

Tony Iommi is quite possibly the coolest man alive. He’s got this amazing presence and pondus, just signifies strength in every sense of the word. Even when battling with cancer, he comes off as strong and powerful. His music is as immortal as he is. 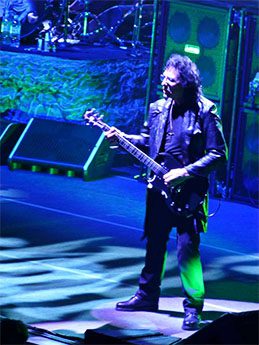 His playing is elegant, so classy and so mighty. He’s got absolute control of those six strings and makes it look so effortless.

While Tony makes it look easy, you’ve got his complete opposite on the left side of the stage. Geezer Butler plays his bass as if he’s trying to punish it for being bad. His fingers are creating a motion blur and his hand looks like a sledgehammer beating the strings into submission. I get exhausted only WATCHING the guy, he is badass.

Ozzy… is just Ozzy, He can get away with pretty much anything just because we love the guy.

When he’s standing there at the edge of the stage, with his hair dripping of sweat – or maybe from sticking his head in that bucket of water as usual, saying: “I missed you! Did you miss me?” it sounds sincere. He’s simply so genuine that most of us just don’t care that he sounds like crap that evening. He is entertaining and that’s what the crowd is there for – to have a good time. In that department, Ozzy always delivers. He’s jumping around with that huge smile on his face like the Barney of metal. No one is buying that Prince of Darkness-shit anymore. If there’s ever been a guy who has a true connection with his crowd, it’s Ozzy.

I never thought I’d get to see “classic” Black Sabbath, and it’s a privilege to have experienced what might very well be the last, or one of their last tours.

There are lots of bands that have tried to copy Black Sabbath, but Sabbath hasn’t copied anyone – they created an entire genre. How often do you get to see a band of that caliber?

The table is served with all the goodies: Iron Man, Fairies wear boots, NIB, Children of the grave and of course the Grand Finale: Paranoid which is introduced with the opening riff of Sabbath bloody sabbath. The Forum is a sea of jumping people, it’s something you don’t see every day.

All in all, Black Sabbath came, they were seen and they left – with dignity.