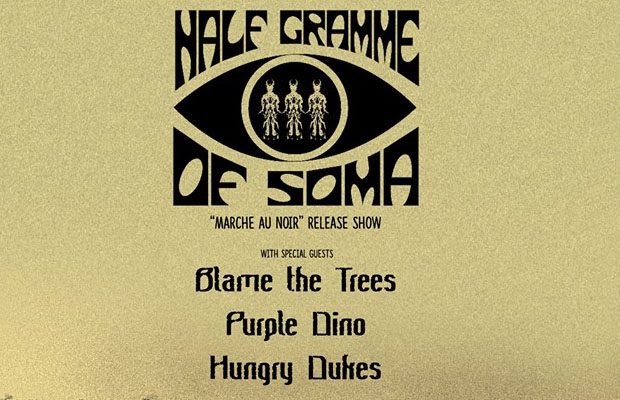 This Saturday it was time for yet another release party from a very promising Greek band. The band of the hour on this occasion was Half Gramme of Soma and the album at hand was their brand new EP, “Marche au Noir”. However, when you’re having a party, you make sure to invite as many friends as possible and so did they, inviting three more bands to open the concert for us.

The first to set foot on stage were Hungry Dukes, a likeable band that warmed up the few attendants with their Doors inspired blues rock (maybe a little Zeppelin in there too, just for the noise/groove of it). Although their songs were a little bit too “safe” for my taste, the key points to be addressed was their flawless sound and the dazzling use of the harmonica by their singer, dressing their blues rock with an excellent and refreshing southern touch here and there. Quite the vocal range on that dude too, so I hope they’ve stepped up their game a bit the next time I see them, since they seem to know their way around the instruments.

Then it was time for one of the most entertaining underground bands money can buy you, Purple Dino, who travelled all the way from Xanthi to get to this live! But, as they said during their set, this concert was totally worth it and I could not agree more. I had the chance to enjoy them in this year’s Fuzztastic Planet Festival in Drama, and their performance on Saturday did not fall short one bit compared to the previous one. First of all, their fascination with dinosaurs does not stop only at the name of the band, since they open their concerts with a metalized version of the Jurassic Park theme! In my book, this is the manliest thing in the universe, right next to Ron Swanson and Neil Fallon’s beard. However, what I really love about Purple Dino is that they look so HAPPY on stage! They are a constant source of laughter and humorous mood, either by making joking grimaces or messing with one another, or quite simply by smiling constantly, showing how much they love just playing music and being on stage. The music itself is just a mishmash of exciting stuff, the usual cement hard stoner rhythm section, and the catchy/groovy riffs, highlighted by little psychedelic notes, but since they are having such a good time making music, they will throw some surf rock or hardcore blastbeats for you out of fucking nowhere! Time flew by, and amidst of loud cheers, the lads from Xanthi showed that they had made the best out of their 45 minutes on stage. By the way, great solos and the “Surf Nicaragua” medley was just orgasmic.

After the Jurassic hard rocking barrage, I found the choice of post rockers Blame the Trees to be an excellent choice to clear up the sound and sooth the atmosphere a bit. I knew we were in for a special treat when their guitarist walked the stage with a pedal unit enough to accommodate an army of guitarists under his arm. Of course the most important aspect was that, as any post rock guitarist who respects his music, he knew how to fully exploit this magnificent machine and so for the next 50 minutes AN Club was filled with all sorts of dreamy, brain coloring and sometimes harsh noise guitar effects. The escalating solos where absolutely fantastic and the occasional minimalistic grunge/progressive approach “less is more” worked perfectly to create the known and much loved post rock atmosphere. However this man was not alone on the stage, with the drummer, the bassist and the keyboard player doing the best to provide extra layering to the songs and a female vocalist with a mind-blowing vocal range, especially on the high pitched notes, vibrating the speakers of AN Club. I especially liked the fact that most of their songs ended with an unexpected, noisy culmination and they generally filled me with hope about the future of the Greek post rock scene.

No time for fooling around though and the hosts of this party present themselves to the Athenian crowd who’s thirsty to hear how the new EP works in live situations. Pretty damn good I have to say! For more than an hour Half Gramme of Soma gave plenty reasons for headbanging to the attendants with their versatile approach upon the stoner sound. It’s really very difficult to pinpoint a genre they can fit in, since they paid their respects to the groovy southern sound of Kyuss, danced around some light sludge fields, revisited the legendary alternative and grunge rock 90’s scene and then topped off the mixture with some surf rock intros and punk rock explosions. Listen to “Secret of the fox” for example (which is not from the new EP but that doesn’t matter much), it’s like Colour Haze mixing with A Perfect Circle. What is more, the lead guitarist seems to have perfected the art of stoner soloing, every time his fingers danced upon the frets it was 20 seconds of maniac magic. Definitely the most energetic band of the night, plus they also rolled a bit on the humorous side, showing great connection with their fans and delivering a very professional and mature performance, giving yet another reason (besides kickass songs like “Hitch Hike”) to their fans for pillaging their merchandise!