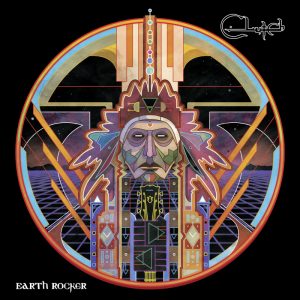 It’s been four years since we last heard from the boys from Maryland, US. Clutch built a memorable discography in the 00’s and especially in the 90’s, earning the hard-given title of one of the best live bands of our generation. The US rockers released their tenth full-length work this year; ‘Earth Rocker’. The title of the album totally reflects the southern and badass tracks of the record, which, I must say, were even better from what I was expecting.

‘Earth Rocker’ provides eleven songs, which could be labeled as hard rock classics. The record begins with “Earth Rocker” and “Crucial Velocity”, dynamite-songs with a lot of energy and aggressiveness. Neil has done a great work on the vocals as well as Tim Sulton has done on the guitars, a fact that is perceived from the very first moments. There are less stoner rock elements, as the main structure of the songs are hard rock with desert-rock touches. Another personal favorite is “Gone Cold”, where acoustic guitar and blues-driven melodies take the lead, reminding the good US southern-rock ballads. There are a lot of guitars solos too, fitting perfectly with the rhythms.

The lyrics are quite good too. They are personal, down to earth and concerning a lot of social matters. “Mr. Freedom” is about the US elections, and the “civil war” atmosphere the leaders of the two major parties wanted to have. There are also songs about girls, justice, music and greed. It is really positive to have lyrics about a lot of matters and analyze important matters in details through music.

As far as the production or the length of the songs is concerned, we have the same result that Clutch always choose; easy to listen sound, without a lot of add-ons or overdubbed. The band’s songs are usually created to be spectacular but simple on live shows. However, I needed something different this time, something a little more experimental. To be honest, someone who listens to the album pretty fast cannot memorize some songs as they do not strike the listener as the first ones. I’m talking about “Cyborg Bette“, “Oh Isabella” or “The Face”. They are rocking ones, of course, but they all sound familiar as if the band has used the same melodies. This, however, isn’t true if you listen carefully and with your full attention on the record. A different approach to every composition or a more experimental sound would be preferable.

Having said enough, I find ‘Earth Rocker’ quite fresh and enjoyable. Clutch always managed to write hits and party-anthems since the 90’s. It’s remarkable the way they combine modern rock (influenced by baroness I could say) with southern rock elements, fuzzy guitars with fast riffs and heavy drumming or ‘harsh’ vocals with stoner music background. Neil’s voice never disappoints and I think that after all those records, Clutch still got the guts to create explosive songs.