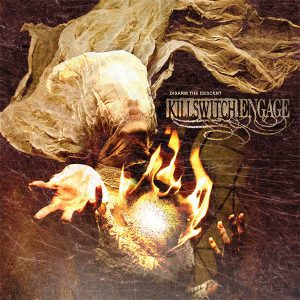 The kids are back and moreover, they’re biting skinny ashes. The return of Killswitch Engage four years after the release of ”Killswitch Engage II” comes with the album they should have released about ten years ago after the monumental ‘‘Alive Or Just Breathing”. The departure of Jesse Leach back in the band was promising on its own (I’m sorry Howard Jones, but I could never bear your undoubtedly great voice in the KSE sound, as it was making them sounding TOO commercial and mainstream to my ears). Rage is back and so is heaviness, both hitting red spots.

The first two KSE albums were a hard bone-breaking punch on the face to all those unfamiliar with the so called ”metalcore” sound. Though I personally can’t accept this categorization (as all in music), I can’t help but admitting that the Bostonians raised this sound and the whole New Wave of American Heavy Metal to heights that few could think of in the beginning of the ’00s decade. ”Disarm The Descent” leaves us to where the band stopped in 2002, sounding furious, hungry and fresh for the hunt of the peak of their career. Is this a second birth for the band?

Well, if you listen to tracks like ”New Awakening’‘, ”In Due Time”, ”The Turning Point” and ”All That We Have”, you’ll surely wonder where the hell have KSE left all this energy and ferocity all these years. And of course, THIS voice of Jesse Leach that made the difference back then, does the same again, only this time it sounds better and more mature. It is such a change in sound, compositions and even the more melodic parts sound more worked and focused than before. Howard Jones may be the one that made the band widely known, but Jesse is the real deal folks.

Even from the beginning of the album with the double hit of ”The Hell In Me” and ”Beyond The Flames” you understand that these new combinations of speed, heaviness, rage and melody work better than ever for the band. They provide a gigantic boost to all the tracks of the album and they put the five-piece strongly back to the first line of the bands that can give something more to the whole American scene. If you compare it to the last As I Lay Dying album for example, ”Disarm The Descent” is a battering ram which leaves carcasses in its wake.

The first move that should be made is a victory, with the tremendous energy Jesse provides they’re likely not going to lose their orientation again. On the other hand, they are in a state where in two years from now we’ll know if ”Disarm The Descent” was simply a spark or the beginning of the fire that will burn all doubts they left in the 2002-2012 decade. Unexpectedly surprising and addictively great, this album has already taken place in my top 20 list of 2013 albums. Let’s see how the new Chimaira album will sound like and we’ll know if the American scene has the answers to all disputes.