Amon Amarth
Deceiver Of The Gods 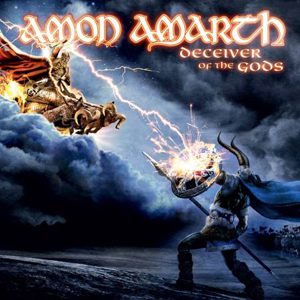 Who would tell me many years ago, when Amon Amarth released their first ferocious EP ”Sorrow Throughout The Nine Worlds” that these ferocious sounding Swedes would become one of the hottest metal acts of the current moment. You see, they sounded so wild and raging that made even more diehard fans of the old (meaning Stockholm sounding) Swedish death metal admit their skills and brutality. Things were getting better with each release, with ”Once Sent From The Golden Hall”, ”The Avenger” and ”The Crusher” becoming three great additions in the band’s armory.

This is where things started taking their turn and since 2002 the Scandinavians have experimented with their music. They always try to remain as extreme as it gets, but that doesn’t mean they always succeeded. It wasn’t until ”With Oden On Our Side” was released in 2006 that we listened something really full of quality from the band. From that point and on, the five little Vikings seem to cause more discussion whether they have something more to give or they just keep a decent level of creativity regarding their studio releases (their live gigs always were and still remain a great proof that they rule on stage).

Their ninth album ”Deceiver Of The Gods” opens great with the title track. So what? It has such a great difference compared to the rest of the tracks that you tend to look which one you may like. It may sound harsh on them, but it gives me the impression that this last decade I’m just listening to repeated ideas from them, ideas that could be good for any melodic death metal band, but not for the once uncontrollable quintet. This constant use of more melodies in favour of harder material is what makes me like the record at first, but loses interest as listenings increase. Something that would never happen with the albums I mentioned above.

We have reached a point that the ‘not so good” AA albums are more than their great ones, and though ”Surtur Rising” succeeded ”Twilight Of The Thunder God” (their power metal sounding album) in a harder and more non-commercial way, ”Deceiver Of The Gods” simply will not make any difference in their discography. Even the participation of Messiah Marcolin on ”Hel” passes unnoticed, as I believe they didn’t take advantage of his admitedly tremendous voice. ”Warriors Of The North” is a good closer but makes me wonder why it lasts eight minutes instead of four or five. Unfortunately the final taste is merely a great one this time.

In case you get me wrong, I don’t say the album is a crappy one. But sometimes you have more expectations from some bands. And I’m really tired waiting Amon Amarth to return in their former glory. I like watching them live (despite they always play newer stuff), I like the fact that they got all this recognition with a lot of effort -and they really deserve it- but I don’t like that I must tell you to listen to the album of Dark Tranquillity instead of this one, which may be much more experimental but at least is an interesting one. The recipe for Amon Amarth seems to work in terms of sales and recognition. It doesn’t work as far as inspiration is concerned. Maybe next time…