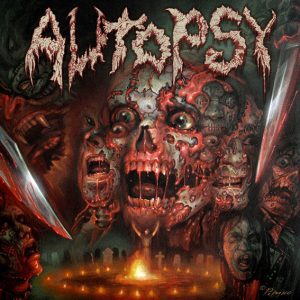 Autopsy were and still are for many fans of metal music the definition of what death metal is and how it must sound like: Heavy, crawling, including gore lyrics and outworld vocals. Chris Reifert can claim being a part of the birth of the genre, as he was alongside Chuck Schuldiner on ”Scream Bloody Gore”, which is for many people the first real death metal release (unless they don’t consider Possessed a death metal band of course). Two years ago Autopsy broke the silence of sixteen years and returned with ”Macabre Eternal”, which is still considered a very important album for the band.

On the other hand, we now have their sixth full-length entitled ”The Headless Ritual”, a more focused album than ”Macabre Eternal” which still sounds as Autopsy, but is relieved from the weight of its predecessor which had to prove that the band was back, alive and kicking. The first and most important difference is the duration of the album, as it lasts less than 45 minutes, in contradiction to ”Macabre Eternal” which was over an hour long and in some parts (let’s admit it, no matter how much we love the band) tiring and lacking consistency. Things are simplier on ”The Headless Ritual” and I think that this is the album that they had in mind while deciding to reform.

First of all, time seems unable to affect Reifert and his partners in gore, as the first lyric you listen is the romantic line of ”You’ll be slaughtered by the beast” on the opening ‘‘Slaughter At Beast House”. Flowers, hearts, love is in the air, you know how it goes with Autopsy, right? WRONG! These walking corpses are still back in 1989 when they released ”Severed Survival” and it seems like they don’t give a flying fuck about new tensions in death metal. Simple, straight forward OLD SCHOOL death metal without much additions, because in their opinion less is always more and they’re damn right about it.

What if the opening track and ”She Is A Funeral” (creepy crawler track) exceed their average track durations? They can still create this tomb atmosphere and make you think you’re in a dark graveyard and zombies are about to surround you and… well, you know what they’re going to do to you, let’s not be so descriptive about that, as the album is of more interest. The album sounds better than ”Macabre Eternal” and one of the reasons is Reifert’s vocals. More mature than ever but without forgetting to make you feel like choking inside four blackened walls.

The most important part is not that Autopsy are still releasing albums and not that they are very good ones, but the fact that they sound as if they have a real fun making them and that inside their minds, things haven’t changed for their perspective as a band and how they treat their music and the scene from which they came from and made EVERYONE respect them (even non death metal fans, unless they are insignificant trollers or haters of all).

For the end, I shall provide the lyrics of the 106 second ”Thorns And Ashes” just to have a hint of what we’re talking about: