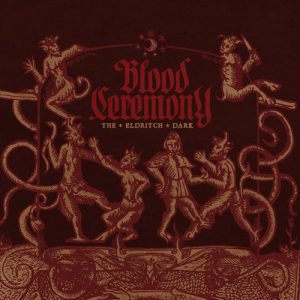 I wonder what it would feel like working on a magazine in the 70’s and having to write a review about a Sabbath or a Zeppelin album. Wouldn’t the reviewer be shocked and then acknowledge that he is listening to something much more than some songs, more like history in the making? And afterwards, wouldn’t he doubt himself for a second, thinking that maybe his personal taste is befogging his – ought –to – be impartial opinion? But in the end wouldn’t he acclaim these albums as monuments for the ages to come, as they deserved it and as they eventually became? Well folks, obviously without making any comparisons with the work of the bands mentioned before, this is case with the third installment in Blood Ceremony’s discography, “The Eldritch Dark”, with one significant difference. It is almost certain that this album will never receive universally the credit it deserves. Thus, I stand at the same crossroad as that reviewer so many years before. Should I review this album as the classic it already is inside my mind and risking to sound exaggerative, or should I review it with temperance? Let’s take it from the top.

In many occasions we state casually that some bands remind us of a mixture of some other bands. If you have never heard of Blood Ceremony before I’ll let you in on two little secrets. A) These guys are an amalgamation of early Black Sabbath, 70’s Jethro Tull and the legendary, “satanic”, occult, vintage rockers Coven and B) These guys are the real deal! They take the best out of each band (Sabbath’s wisdom in riffs, Jethro Tull’s unsurpassable flute work and the female fronted and occult style of Coven) without copying anything and give birth to this new, pulsating, and refreshing sound! Their influences from mythology, witchcraft and vintage horror movies are ever present. Five years after their breathtaking debut with the raw folk/doom sound though, Blood Ceremony sound more mature than ever. It’s not like they failed us at some point in their career, but it is obvious that the more solid, more professional approach that was adopted in “Living with the ancients” has now been taken to the next level. However, this seriousness on their work does not stop Blood Ceremony from delivering the most important sensation to the listener with “The Eldritch Dark” and I am talking about immersion.

The whole album flows like a stream made of notes, like a story you hear around the fireplace on a cold autumn night, a story of wonders, a story of darkened dreams, a story of animism and witchcraft. Visions of pagan masses pass in front of your mind’s eye as the music travels around your brain, flashes of dances around bonfires in small groves. Alia’s flute welcome’s you in wonder and her voice (without being all purry and provocative like some other “metal” ladies) is one of the most beautiful and sensual sounds to be listened to nowadays. She is the star of the show, the quintessence of a front woman, a modern Jinx Dawson and a vibrant artist that shows the way for all the other female occult rock singers. It is utterly obvious that she enjoys being in this band and singing those songs. Besides the necessary “dark” tone that she uses in the tracks (as dark as her lovely voice can be), in many occasions you can hear her highlighting exceptional doom riffs with joyful singing and the result is out of this world.

Now, when it comes down to the music in this album… I don’t think there is much I can say. It seems like Blood Ceremony have been possessed by that spirit that drives some groups to nail every single note (Think of 80’s Metallica and Maiden per say). Every riff sounds exactly as amazing as it should; every keyboard (also played by Alia O’Brien) and flute melody makes the hair on the back of your neck tingle. No matter how hard I am trying, I can’t find a mediocre moment in this album. “The Eldritch Dark” is undoubtedly a masterpiece and a musical monument for the ages to come. Just listen and see for yourself. But I can’t help but wonder; this band has given us three consecutive groundbreaking masterpieces (each one of them a masterpiece for different reasons). How much more will it take for them to be acclaimed and praised around the world, as they deserve? Because it is possible (and very well justified) that at some point they’ll run out of inspiration and by then they will not have receive the recognition they deserve and other bands enjoy from their debut ( for many non musical reasons I am sure we are all familiar with). But I guess that’s always the fan’s internal question for every band that they believe stands out as much as I think of Blood Ceremony and this is how this world works. We appreciate them, we hold their music within our souls and keep hoping for the best.

P.S I avoided talking about any song in particular because I’d like to think of them all as classics and individually perfect. However, even if you don’t think you’ll ever be in the mood to listen to the whole album, do yourself the favor of listening to “Lord Summerisle”. I don’t think there have been many ballads in rock history as spine chilling as that one.