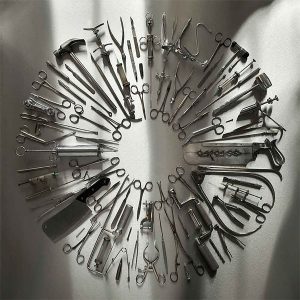 Regarding an album that comes from a band that reforms after many years, we can state that ‘’Surgical Steel’’ is not only the return of the year 2013 but maybe the return of the decade so far. Eighteen years after their last diamond called ‘’Swansong’’ and twenty years after the critically acclaimed ‘’Heartwork’’, the English quartet decided to record an album after their new reformation somewhere in 2008. Without Michael Amott on the guitars and drummer Ken Owen, but with the always decisive duo of Bill Steer on guitars and Jeff Walker on bass and vocals, the grinding gentlemen leave no room for discussion with an album very fresh, very heavy and most important, very intelligent in the recording process, as it contains all the basic elements of the band’s past, filtering them for the likes of 2013 and finally the album ends up as the little brother of ‘’Heartwork’’ in terms of structure and atmosphere.

Of course, ‘’Heartwork’’ is an album that has already proven its value the last twenty years, and it may be a little heavy to state that ‘’Surgical Steel’’ is a close relative to it, but if you listen to this album carefully, you’ll find the great heavy rhythm guitars, the essential solos and the grinding outbursts that made ‘’Heartwork’’ a legendary album included on this latest release of the British. Before you start cursing at all directions, I’m sure the material turned out the way it sounds not under discussion or deep thoughts, but simply with the band jamming in the studio and feeling like this was the right direction for them to continue (not that anyone expected them to make a second ‘’Swansong’’, but since every album was different, who could know?) in this second birth. I’m all in for the album’s sound and final outcome and It’s easy to explain why.

First of all, it will immediately grab you by the ears (or balls or whatever) with ‘’Thrasher’s Abbatoir’’, a 110 second storm that opens the album after the ‘’1985’’ intro (their formation year) and makes you already smile. You’ll find compositions in ‘’Surgical Steel’’ that it’s certain you wouldn’t expect, such as ‘’The Master Butcher’s Apron’’, ‘’Unfit For Human Consumption’’ or the first single ‘’Captive Bolt Pistol’’, where Carcass not only don’t lose their speed and grinding mastery, but also manage to sound as great as they did in the past. I’d dare say that such tracks are not included in their previous albums and they make ‘’Surgical Steel’’ a tight and very solid record that will prove from the very beginning that Carcass are here to stay this time. The joy is profound when you start digging to the other tracks as well, I just mentioned the fast ones for the beginning.

The rest of the tracks show how heavy and flexible death metal can be, it doesn’t matter if you like all of them or if you pick some of them as more special, I like all of the album’s tracks almost the same. I must make a little further reference to the ending with ‘’Mount Of Execution’’ which is the longest track of the album, over eight minutes in length and over eight… other bands’ discographies in interest, as it becomes heavier in its flow and closes the album in a very ideal way, the double guitar melodies get combined so masterfully with Walker’s acidic throat and the whole production of the album raises the whole outcome in such a level that it becomes one of the best albums of 2013 very easily and with no second thought from fans of death metal, while even not specified death freaks will stay untouched by its quality.

‘’Surgical Steel’’ was more than a pleasant surprise for me, not because I didn’t expect it from Carcass (whose every album is a masterpiece on its sound), but mainly because I didn’t know the direction they would follow. The multiple ‘’Heartwork’’ references may drive people to consider they played a safe card, but if you listen to the album carefully you’ll soon realise it’s just the typical reaction of people who just to show off themselves and create rouse where many different options or opinions are given (ever heard of a grinding troller? Here’s your chance to meet some with this album). Carcass show the way to many bands out there in terms of creating a great album, fresh in its whole flow and rather promising for the band’s future and continuation (unless they don’t split up in a split second like they did in 1995 of course). Bleeding works of art? You got one more for your collection. And beware of the album’s cover scissors and other surgeon’s tools, they may cut you for real this time.