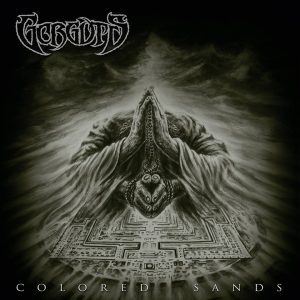 To be fully honest with you, I must state first of all that I no longer have any expectations from my beloved Gorguts, not because I feel they can’t create the compositions and the atmosphere of their first four albums before their split-up, but mainly because a dream came true and I was very lucky to see them live last year, where I discovered that what I knew and thought of the band was soon crashed under the weight of their live performance. This enormous experience has already reduced my needs for the Canadians masters of progressive technical death metal, that the joy of their new album after twelve years called ‘’Colored Sands’’ is put asunder. Of course I never thought I would witness a new release from Luc Lemay and his company and I am more than happy about it, imagine what it means for a fan of such a band being able to review their new effort.

If we want to be straight, this album concerns only the fans that got to know the band after the release of ‘’Obscura’’ or ‘’From Wisdom To Hate’’, or the ones that have no problem with the band’s albums and like the two aforementioned ones as much as their two first old school death metal landmarks ‘’Considered Dead’’ and ‘’The Erosion Of Sanity’’. So if you are a fan of the band’s first two albums only, this is the time where you must stop reading and concentrate to another album released this year (starting with the one Ulcerate have recently released for example). ‘’Colored Sands’’ continues (as if not even a single day passed) from the likes of ‘’From Wisdom To Hate’’, only this time it’s even slower (or mid tempo in the best case), more progressive, more crawling and complex for the listener and generally rather hostile for the ears of fans who want their music more straight forward.

This is an album where the rhythm section completely takes over, the guitars play a second role even if they are leading some of the tracks here, the skills of the bassist and the drummer (John Longstreth from Origin tears up the skins on this album) are so nominable that even this unfriendly and soon to be hated album will make everyone admit that the parts they play are so unreached that everyone –Gorguts fans or not- will put his hat off for them. Luc Lemay’s vocals are mainly accompanying the compositions, it feels to me that the band wouldn’t have a problem if this album would come out as an instrumental one. It is the suffocating atmosphere of ‘’Colored Sands’’ that steals the impressions more than the compositions and every member has managed to serve more for the sum of the sound, rather than each one’s personal skills.

The album has some great moments that still remind of the band’s glorious past, like ‘’Forgotten Arrows’’ and ‘’Enemies Of Compassion’’ for example, which are the most up-tempo tracks of this release, without counting out the initial duo of ‘’Le Toit Du Monde’’ and ‘’An Ocean Of Wisdom’’ or the magic touch of ‘’Ember’s Voice’’. Most tracks are long in duration, five of them exceed seven minutes in duration, while the album clocks at almost 63 minutes, becoming the longest playing release of the Canadians. The truth is that there are parts in some tracks that may tire you enough, others that will make you think why the compositions (or the album in general) aren’t way shorter and if you put things in the balance, then the negatives weigh more than the positives. As long as you like all of their albums, you’ll have no problem adapting to the likes of ‘’Colored Sands’’ as well.

On the other hand, if you like your death metal more raging or even if you are a fan of more technical and progressive material, then bands like Atheist or Cryptopsy will come to your mind regarding the creation of a better technical death metal album. ‘’Colored Sands’’ has its moments but is way too bizarre for someone who doesn’t have time to give an album some more listenings. Regarding my personal taste, I think that with ten or even twenty minutes less, the album would be much better. Still, it’s a Gorguts album that shines with a unique blaze and this means a lot on its own. Since not all of you consider Gorguts as much important as I do, then by treating this album as a death metal release, it comes out to the personal taste and expectations of each of you. Since I have heard much better albums on the genre, and considering Gorguts not dead yet, I’m somewhere in the middle, so the rating is just my humble point of view.