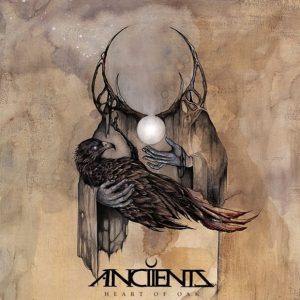 When I was informed about a new-come metal band from Canada, which is playing some qualitative modern metal, I couldn’t imagine what I was about to hear. Anciients come from Vancouver and have released an EP back in 2009. I have never had the chance to listen to the EP before and as a result ‘Heart of Oak’ is my first experience with the group. I found myself really curious about the record, because Anciients are worldwide known about mixing elements of plenty music styles, especially progressive elements.

‘Heart of Oak’ is a promising debut, which denotes all those needs for an awesome record; a record which is dynamic, heavy and has something more to educate in the lyrical part. The music seems to be a fusion of modern heavy metal with progressive elements all over it. There are parts where the guitars headline in the sound, with beautiful melodies and parts where the song gets striking heavy. The long songs with loads of changes in their structure remind me strongly of bands like Baroness or Mastodon, and older bands like Iron Maiden. All those bands in most of their songs prefer the same method of using guitars to change and expand the song with a lot of riff changes.

With ‘Raise the Sun’ and ‘Overthrone’ to be the first two tracks of the record, we are introduced to the world of Anciients, where fantasy meets reality, choir vocals meet dreamy guitar solos and raw aggressiveness meets beauty. Along with ‘Giants’, those three songs are my personal favorites in the record. Besides them, we have ‘Falling the Line’, which opens with acoustic guitars and a jazzy mood, to turn out as an eight minute long chaotic song, ‘The Longest River’ too. In songs like ‘Faith and Oath’ the band touches some extreme metal elements, in the beginning of the song for example. The introduction reminds me of black metal in some parts, while the solo afterwards in the song chills with blues notes and melodies. It is quite visible that Anciients combined all of their influences in this record.

Additionally, there are two instrumental songs in this record with ‘For Lisa’ to be a long one and ‘One Foot in the Light’, which Is one minute long. As a whole, ‘Heart of Oak’ counts one hour of music, plus twenty minutes in the deluxe edition. Regardless of the awesomeness of the compositions, I really thought that the ideas are stretched up a little. Some songs could be a few minutes longer. Lesser minutes help with the flow of the record, as well as the easier remembrance of the tracks.

However, I consider ‘Heart of Oak’ a debut record which reflects what Anciients can achieve in the future. I believe that the band will make a name for themselves and eventually will become one of the hottest names in the underground metal scene. ‘Heart of Oak’ is pleasant and addictive. Its fantasy lyrics will travel the listener afar in the music world.