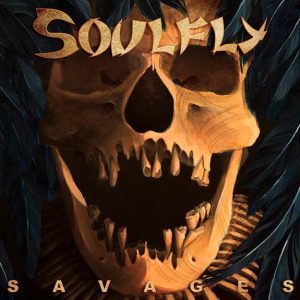 To be really honest with you, I had lots of fears concerning this album and Soulfly’s future in general. If we think that it’s the ninth album in fifteen years’ time (!!!) for Max Cavalera and his team and that it was clear the last three albums after ‘’Dark Ages’’ were lacking in quality (especially compared to the first five amazing albums of the band), then you understand why I was personally expecting something even worse than ‘’Conquer’’, ‘’Omen’’ and ‘’Enslaved’’. Luckily, Max proved me wrong, as ‘’Savages’’ is not only better than these three albums I mentioned, but it also shows that Soulfly have understood that they were in a rather critical point for their career. They are to blame for not following the same course as in their past and as they became a very important band that would raise hell, they also ended up sounding not interesting at all.

A sudden change was needed and ‘’Savages’’ pours a very fresh air and some very special moments in it, that you have to admit Max did a great work this time and managed to invert the impressions caused for his inspiration after releasing the first Cavalera Conspiracy album. Though ‘’Bloodshed’’ is in my opinion one of the weakest tracks of the album and surely not the ideal one to open a Soulfly album (remember the first track in most of their albums and you know what I’m talking about), the rest of the album repays the listener with addictable tracks of simple but pounding groove and with the tribal sounding fillings returning as much as they must after many years. First is the thrashing storm of ‘’Cannibal Holocaust’’ that awakens the sleepy feelings inside you and make you wonder why Sepultura aren’t reforming with their old line-up to make fans happier.

Then follows a series of great tracks such as ‘’Fallen’’ (when was the last time you heard such great combinations in a Soulfly track anyway?), ‘’Ayatollah Of Rock’N’Rolla’’ (with Neil Fallon from Clutch making his presence notable) clocking at more than seven minutes), ‘’Master Of Savagery’’ and ‘’Spiral’’ making the album flow even better and Max sounding enraged as in the past on ‘’This Is Violence’’. ‘’K.C.S.’’ features Mitch Harris from Napalm Death and evolves in a punching track after its simplified beginning and with ‘’El Comegente’’ we have the longest track on the album, almost reaching nine minutes in duration to become a great epic, before the album closes with ‘’Soulfliktion’’ and you get a feeling of satisfaction you didn’t expect before you started the listening of the album. ‘’Savages’’ is one of the very pleasant surprises for 2013, mainly because the recent course of the band wasn’t allowing such thoughts.

If you add ‘’Fuck Reality’’ and ‘’Soulfly IX’’ as the bonus tracks of the limited edition, the final outcome sounds much better, though I insist on the specific numbered Soulfly tracks on each album not to be featured as bonus tracks. After the whole groovy energy on the album, the final touch with ‘’Soulfly IX’’ makes you calm down and value this release way more. It seems that Max is still able to write good and full of quality music, but at a point of the album’s flowing, I’m sure you’ll question yourself why it had to take so much time for him to do the essentials and recover from a state where his skills were really put to dispute. Many were the fans (including myself) stating that he needed a large break from album to album to refresh his batteries and come up with something really different the next time.

It seems that he proved us all big-mouths and managed to achieve the wishful outcome much earlier, but nine albums in fifteen years is an excess that in the times we live, could ‘’burn’’ any composer and leave him dried out of energy, inspiration, motive and everything else making a musician feel alive. I don’t know where Max found the strength to return so refreshed, but he must keep this energy active in the future if he doesn’t want fans to feel he’s repeating himself. Each one of us would like him back in Sepultura and those few who don’t, support their opinion for the old times’ shake. None can blame them. I’m happy he’s sounding strong and energetic and even happier that he’s going to put the new Sepultura album to the test, as I believed it was surely going to be better than ‘’Savages’’, now I’m not that sure at all.