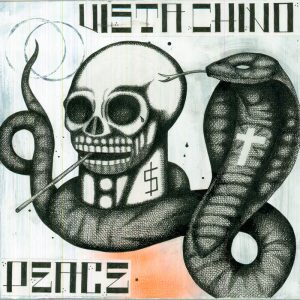 It was finally time for the remaining members of the always glorious Kyuss to release an album, playing together after so much years. Some judicial conflicts with former Kyuss guitarist and current Queens Of The Stone Age leader Josh Homme, made the delay longer and bassist Nick Oliveri abandoning ship before the album got recorded. With the help of Corossion Of Conformity bassist and vocalist Mike Dean, the album was completed and vocalist John Garcia, drummer Brant Bjork and the new entry guitarist Bruno Fevery, who helped them a lot to the Kyuss Lives gigs, the name change was unavoidable and the first effort of Vista Chino called ‘’Peace’’ is finally out to face the challenge whether it can stand rightfully next to the Kyuss releases or the other projects the band members took part in after 1995. The result pretty much came closer to what many thought but none would admit easily.

‘’Peace’’ is an album close to 51 minutes in duration which is not only unable to bring something of the Kyuss touch to surface, but mainly acts more as a large drawback to the efforts of the three-peace. What we lack here is this large feeling of feeling large, confident and always full of quality as Kyuss always did. There can be no elements of surprise here regarding the sound, the production, the track structures and the whole atmosphere pouring from the speakers. Kyuss would certainly raise hell and all the desert’s sand with their music, not to mention the performance of each member which was full of soul and honesty. Honesty isn’t missing from this release, but soul seems to have gone away, in order to offer something which doesn’t sound different, doesn’t sound fresh and isn’t winning the impressions (at first place at least) for the band’s new start.

The main problem is the nerve missing from the album. First of all, John Garcia reminds nothing of his former self, with his voice toned much lower and his outbursts missing so much from the album, that we start listening to this release without its most basic potential, the element of groove that’s missing rather much more than expected. The riffing isn’t even close enough to Homme’s, and it’s a pity, because I’ve witnessed Fevery kicking ass performing the Kyuss songs, so I expected him to be able and compose such material that would come close to such atmosphere the least. What we have instead are songs that wouldn’t even fit as Kyuss b-sides. Even the other projects the band members did after Kyuss are so much better than Vista Chino that I couldn’t help but feeling a little sadder than usually with an album I expected so many years.

If you want to purchase a track that could help you like the album much more, then it’s a difficult process, for example a track opening the album after the intro ‘’Good Morning Wasteland’’ like ‘’Dargona Dragona’’, should sound a little more groovy or at least hell-raising, like the first Kyuss track in every album did. With the songs flowing, sounding hollow and without any identity, the only one that could offer something in its listening could be ‘’Planets 1&2’’, but it gets lost in the general mediocrity of the album. You can’t blame them for not trying for sure, but it’s the expectations you have from such musicians, whose experience should have prevented them from releasing something so indifferent, in a time where every single new stoner or heavy rock band sounds refreshing in order to try and compete this ongoing rise of this sound, or else they’re lost from the beginning.

Vista Chino cannot convince us that they came here to stay with their first album. I don’t know if it’s the yearly battle between them and Josh Homme that have stranded all their energy, but in the end I can claim that this album shouldn’t have been released at all, as I feel it will cause them more harm than any goods. The worst I feel is that even QOTSA could have released a better album and there’s no larger insult for ‘’Peace’’, because everyone that knows me well, know how much I hate everything connectet to QOTSA. The most sure thing is that I’ll seldomly put and listen to this album again. It’s not even one of those albums that you could value after numerous listenings. What happened to the fire burning inside Garcia’s throat and Bjork’s hands and feet? Sadly enough, I think that this album is a large step back for them. Hopefully for the last time, as if they go on like these, they will only remain in history for the good ol’ times shake.