Rivers of Nihil
The Conscious Seed of Light 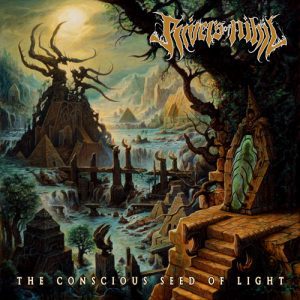 Rivers of Nihil, the young band from Pennsylvania, USA, came with their very first debut record this year, aiming to deliver some solid technical death metal to the music scene. The band after two successful EP’s signed with Metal Blade Records and released ‘The Conscious Seed of Light’. The album’s artwork is just excellent; it is a fantasy landscape which is just spectacular. But let’s find out, if the band accomplished to amaze the audience with their music!

As I’ve stated before, we can describe Rivers of Nihil as a technical death metal band. However, in the specific record the band has used a numerous of slower break-downs, which isn’t bad at all. It is actually interesting to hear the band changing the speed and flow of the song and use a great number of guitar riffs and melodies. Most of the tracks are mid-tempo, with speedy, explosive bursts or slower parts. We have a major use of guitar riffs of note triplets, which create great melodies and change the lead guitar parts of the songs in a very completing way. I needed more dynamic in the band’s performance, but that is a matter of sound’s engineering. I would love to hear a more exploding sound in their next record.

The tracks are mostly about social matters and the lyrics aim on humanistic issues. ‘Soil and Seed’, is a fair example of what the record is about; Mid-tempo, blusting drumming and sharp guitars. The vocals are brutal and blood splitting. Just listen to songs like ‘Rain Eater’ or ‘Birth of The Omnisaviour’. Those songs would sound like dynamites on stage! I can hear the bass all over the record, setting a perfect background for the guitar’s melodies. In ‘Terrestria I Thaw’ the bass leads the instrumental song and really amaze the listener.

The record sounds modern and without doubt not old-school (as far as the sound engineering is concern). In song’s like ‘Place of Serpents’ the band reminds me of Lamb of God for example, with loads of break-downs and delivers something more than plain death-metal. This makes the band sound unique and does not regurgitate old riffs or ideas. It is always a pleasure to find out those entire new bands which provide something really unique and innovating.

There’s nothing more for me to add. I enjoyed ‘The Conscious Seed of Light’ to the fullest. If the band refine their sound and maybe use some djent elements with their death metal (that would be great to hear, death metal with some djent or modern metal outbursts), they will surely become one of the most qualified bands in the underground scene.