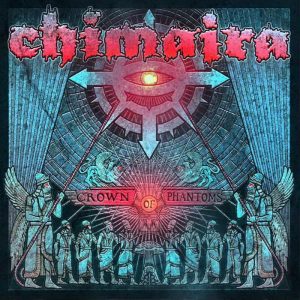 This is one of the most important releases concerning a band that was just a step away from pure uncertainty when all the members apart singer Mark Hunter left the band and the once unstoppable and each time innovative Chimaira was about to split up. But not in Hunter’s mind, who not only managed to find the right partners in crime and somehow ressurect the sleeping beast, but also returned with a great album which first of all proves that the band can write amazing material no matter who participates in each album and in overall, shows that if you have the spark inside you, it can always become a fire that will burn everything (and everyone) opposing you or standing on your way as a (needless) obstacle. This will always be the most critical release in Chimaira’s career, even if it’s not their best or most daring.

‘’Crown Of Phantoms’’ has a lot of things in common with the two previous albums of the band, as it keeps up the adrenaline and the up tempo atmosphere of ‘’The Age Of Hell’’, but also with a large touch of the groove and heaviness included on ‘’The Infection’’. The result of course could be nothing but lethal once again, and you can understand this from the very beginning with ‘’The Machine’’, a track which is certainly a reference to the band itself (‘’we have died a million times before’’…) and sets the tone for the upcoming assault with the killing double attack of ‘’No Mercy’’ (the first video of the album) and ‘’All That’s Left Is Blood’’ (which leaked before the album’s release and made us smile a lot). Hunter is in perfect shape and his excavator-like throat will dig your ears to find a good place and stay inside for months, maybe years.

The guitar work is more mature than ever, they play fast where needed, in most parts of the album they are the background basis for Hunter to step in, accompanied by the great rhythm section which was always Chimaira’s boosting part, especially in the gigs. Tracks like ‘’I Despise’’ are the whole essence of Chimaira, groovy, heavy hybrid metal sound that has no need to sound traditional just to please the old school fans, this is 2013 and though the band members grew up with Metallica, Slayer and other traditional bands, they always had a more modern approach to their sound which they have always evolved in each album, pleasing more or less fans each time, but still they dared to do what they felt and that’s the best with this band and why it became one of the pioneers of the so-called New Wave Of American Heavy Metal.

‘’Plastic Wonderland’’ is the epitome of a gigantic track, put in the middle of the album before ‘’The Transmigration’’ interlude, which serves like the calm after the storm. In its first half, the album has already knocked down each possible dispute whether Chimaira have still something to offer or not. As soon as you realise that the band is definitely here to stay, then you’ll enjoy the album much more, it is clear after 10 minutes of listening to it (maybe less if you catch the atmosphere easily no matter what kind of an album you’re listening to). The second half of the album could have been a little better though and if it weren’t a little unequal in my ears, we’d deal with a super album here. The final outcome makes it sound very good but a click lower than ‘’The Age Of Hell’’ at least.

That doesn’t mean that tracks like the self titled, ‘’Spineless’’ and ‘’King Of The Shadow World’’ aren’t great, but the last two ‘’Wrapped In Violence’’ and ‘’Love Soaked Death’’ could be missing, as they leave a very mixed emotion in the ending of this release. Of course you can still give a rat’s arse in what I’m writing and enjoy the album like I’m doing all this time since its release. If this album concerns the survival of the fittest (like they say on the title track), then Chimaira surely deserve a place in our hearts, not only for not calling it quits after all these drawbacks and line-up changes all these years, but mainly because each time they don’t let us down with their view of what heavy music is about. The new line-up kicks ass, I think that the next album will be the real deal though.