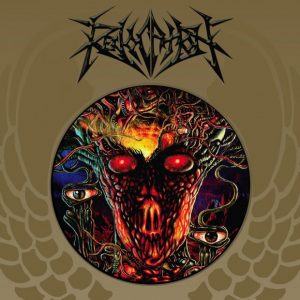 The return of these unbelievably skilled players with their fourth full-length release and sixth in total, made me have a big smile on my face, even before the release of their self-titled album. If you know what Revocation are about, then you might feel exactly the same, as the Americans always find a way to sound interesting, fresh and innovative with each album. While they play extreme music, they always contain essential and well structured melodies inside their tracks, where you can almost listen everything. Above all of course, come the great riffs and the insane blast-beats, masterfully put where they are needed in order to make them sound even more furious. The mixture of thrash and death metal in their music in their most modern aspects gives them a character which is difficult to find even in larger in name and status bands compared to Revocation.

This is a short way to explain the skills of this band, so let’s go on with the album which personally speaking, caught me by great surprise. Not because I didn’t expect such a result, quite the contrary. It’s really different to believe you’re going to listen to something special, and way too different to see it (or preferably, listening it) happening. Maybe the band decided to give its name on the album just to show that this was the album they really wanted to release all these years and a way to say ‘’This is Revocation, this is who we are and what we really sound like’’. It could be just an option, but even if this is not likely to occur, this is what I believe for the guys. I don’t know if it’s the best release they’ve done so far, but if I was in the band, I’d think it’s the most mature and ambitious for sure.

To make matters better, the album starts with a modern thrash anthem called ‘’The Hive’’. An amazing track that would blow the listeners straight ahead if they start their gigs with that. Everything you’d like to listen in thrash bands with a more modern feeling is contained in this track. Bull’s eye from the beginning and the album goes on with an amazing series of songs, where you will really struggle to find which one may suit you better. The duo of ‘’Scattering The Flock’’ and ‘’Archfiend’’ develops the skills of the guys and shows to you why they are special. Amazing tracks, filled with riffs, melodies, blasts and great structures. The next two ‘’Numbing Agents’’ and ‘’Fracked’’ will also catch you by surprise, as they are way shorter and thrashier. Revocation sound as if they do miracles inside your ears and you’re in a state where you want more stuff like that.

The first part of the album is over and here comes the second and humbly believing more interesting, where I was totally owned by ‘’Invidious’’ (banjo riffing anyone?) and ‘’Spastic’’, a track of Dream Theater level music where you’ll surely wonder ‘’What the fuck are they playing and how will they remember it if they play it live’’? Things get even better with the last two tracks ‘’Entombed By Wealth’’ and ‘’Avisitation’’, where you will need to recover from the constant bludgeoning the band has to offer. All ten tracks exceed the expectations of the middle listener who doesn’t happen to know the band. There is not a single filler in ‘’Revocation’’, nor any moment that’s not interesting or obsessive. The ones who listen to them for the first time may wonder why they hadn’t encountered the band’s music so far, though it’s never too late to make a beginning.

Revocation made an album for which they should be more than proud. The whole creation must have been tiring and demanding, but it was definitely worth the hours spent. All members have reached colossal levels of musicianship, they bridge the gap between thrash, death and modern metal in such a way that they will convince even the most suspicious fans. Last but definitely not least, as a bonus track comes a great cover of Metallica’s ‘’Dyers Eve’’, from the best album created ever, ‘’..And Justice For All’’. Most Metallica covers I’ve listened through the years were not even decent, this one is surely the best I’ve listened the last years and AT LAST, a band that plays Metallica’s solos right and accurate. Revocation made their presence more than notable this time. If you have trusted my opinion once or more times through the years, you have to do it in this case too. One of the best albums for 2013 quite easily.