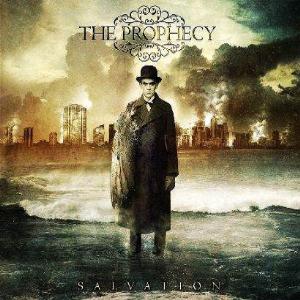 The British doom/death metal band The Prophecy have just released their fourth full length album, “Salvation“, these guys play something between doom/death metal but with progressive elements. Τhe death metal elements on ”Salvation” are not really all that heavy, and you relax on your chair compared to the excellent doom metal that is on the album. Τhe music here is very atmospheric and soothing, with the sound of calming wind and waves greeting the listener on opening title track “Salvation“.

The opening notes on the clean guitar, along with the strings bring the listener into a mood of melancholy. And as the song progresses there are some similarities to the prog rock material of Opeth, especially the singing reminds a little bit of the calm singing of Mikael Akerfeldt. The music here is certainly more doom and slower compared to the aforementioned. Each of the musicians here are equally capable on their instruments, and throughout the album they get to show their skills.

The songs at times even bring in some progressive influences, with some odd time signatures that the band plays at. The death metal elements rather than taking a brutal style that one may expect, are here instead to complement the at times dark -at times- atmosphere in the music. The vocalist manages it equally good as a growler and as a clean vocalist, along with the heavy riffs of the guitar and the good drumming which also shines throughout the album as it changes quickly shift from calm, simple beats to aggressive, heavy pounding on his kit.

For the most part of the album though, it is a soothing melancholic melodic emotional and refreshing journey with clean singing, clean guitars, melodic, soaring solos and a comfortable, relaxing pace with that tinge of aggression that has been infused in the band’s music with their death metal elements.