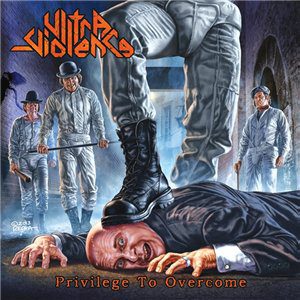 File under: Italian Thrash metal. Well the Italians were not as big as the rest of Europe (Germany that is) in terms of influence but made some well received names such as Bulldozer and Necrodeath or Children Of Technology in today’s Thrash metal scene. The band reviewed today has been a pleasant surprise for the writer first of all with their name taken from the Bay Area classic “The Ultra Violence” by Death Angel.

Their debut album “Privilege To Overcome” starts off with “Spell Of The Moon” with wolves howling and a groovy Machine Head riff kicking in only to turn into a violent Thrash riff followed by blastbeats with vocals like a mixture of Max Cavalera (Sepultura) and Mark Osequeda (Death Angel) including an amazing groovy chorus and top notch soloing and riffing showing the Bay Area influence. “L.F.D.Y.” kicks in old school Bay Area style balancing between mid tempo and Thrashing parts with great solos ripping through. “Order Of The Black” has a few midtempo parts and being a full on Thrasher makes it a concert must especially that Slayeresque riff after the groovy mid part could definitely cause a lot of pain in the mosh pit.

The violence continues with “Stigmatized Reality” ripping fast through the listeners ears before grooving a bit only to come back to the original speed and a kind of a Black metal-influenced pre-chorus leading to a groovy chorus then back to the mayhem with some kick ass soloing. An Exodus-influenced riff leads us to “Restless Parasite” which just keeps up the Thrashing tempo destroying everything in its path. Got to give credit to the awesome gang vocals (would make Exodus proud). “Turn Into Dust” starts with a Destruction-like fast riff and a headbanging chorus making it one of the best songs on the album and a middle section mentioning the album title giving goosebumps to the listener fading out with a kick ass groovy riff.

A bass-drums intro leads us to the albums’ longest “The Voodoo Cross” with headbanging Heavy riffage snapping some necks reminding a bit of Metallica‘s heavy riffing, followed by an acoustic part over a spoken sample then back to the Heavy riffage. Suddedly we come back to the S.O.D. influenced “You’re Dead!” clocking at under 1 minute bringing back the full-speed-ahead motif. “The Beast Behind Your Back” starts with a stop-and-go fast riff reminiscent of Testament then moving to mid-tempo speed and into a groovy chorus never completely letting go of the speed. “10000 Ways To Spread My Hate” (the promo video of the album) starts with a clearly Bay Area influenced riff that might remind of Lamb Of God (a good thing according to the writer) including one of the most headbanging choruses of the album including blastbeats showing heavy Death metal influence and raising the level of the song in general (as in other songs put perfectly when needed to emphasize a song part).

“Metal Milizia” is a cover from a band called Ira and starts off with a movie sample intro before Thrashing the old school way. “When Future And Past Collide” is an acoustic intro to lead us to “Ride Across The Storm” the second longest song of the album. Blastbeats and Black metal riffage that even remind of Dissection begin the song going into a breakdown then to a headbanging modern Thrash riff that keeps until the melodic chorus showing the frontman Loris Castiglia‘s capabilities in actual melodic singing and some Maiden-esque dual solos towards the end fading out. Definitely the most special song to end the album. Ultra-Violence managed to blend the Bay Area Thrash influences with the sound of today’s metal without sounding out of place or irrelevant but delivering a great Thrash metal album. That makes them really special case and deserve to be followed closely in the future. Horns up!