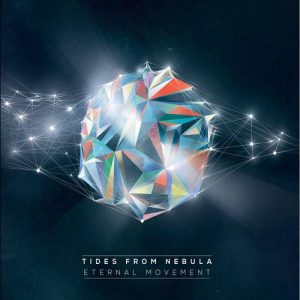 The past two decades saw the rise of post rock and metal music genre. Those genres drove quite popular in some years, with Europe to be the centre of this music revolution. Many bands, chose to stay instrumental and do not include vocals in their music, such as Russian Circles or Tides From Nebula. The last band, Tides from Nebula, is known for its spiritual, instrumental music and their long touring experience. Along with The Ocean Collective, the band is rocking Europe this year, supporting their new release, titled ‘Eternal Movement’. The specific record is the subject of this review.

How can I describe Tides From Nebula’s music? Well, that would be easy. Tides from Nebula are a trip in the universe, an instrumental define of the spirituality of the universe, a trip to human’s soul. The band uses the same pattern as every post-rock band; trippy guitar melodies and an overwhelmed of effects music, only they differ in some points. They put aside the groove and they mostly use keyboards for the background and ambient elements. Their style is unique and their songs are ideal to be performed live.

‘Eternal Movement’, do not differ from their previous releases. The disc includes eight ambient post rock tracks. Generally speaking, the record is full of synthesizer’s parts and keyboard’s parts. The skeleton of the songs is based in guitar melodies and keyboards, and then the rhythm section is added loosely in the songs. The bass lines are great too; I can hear the bass behind everything, playing specific melodies, different than the guitars. The record has a great flow, but I always miss the vocals in those songs and bands, generally. As a listener, my mind gets a major astral projection hearing the music, but I tend to get a feeling of something missing.

The record opens with ‘Laughter of Gods’, a song with futuristic keyboards which remind me of the Vertical records by Cult Of Luna. I loved those melodies in the background by the keys and synthesizers. There are plenty of guitar melodies to choose, from clean guitar melodies or muted riffs to distorted guitars and dazed, trippy riffs. Just listen to ‘Only With Presence’ and or ‘Satori’. The guitars drive the songs between parts of music, creating the ambient mood for the listener. There are piano touches in these songs, like in ‘Emptiness of Yours and Mine’. The record is quite a spiritual disc, a long record with a nice flow though.
Overall, the record is enjoyable and amazing for the lovers of ambient music or post-rock. I’m looking forward to hear the band live along with The Ocean, on 25/11 this year. I’m sure they will thrill everyone that day!