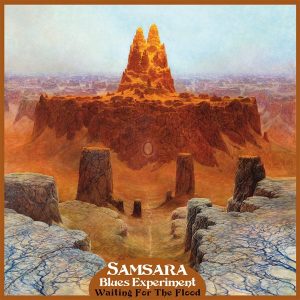 The Germans are coming back! Not for a new war as people feared about seventy years ago but to give us a great touch of what good music means. Germany’s Samsara Blues Experiment are one of the best things that happened to music since 2010 and their monumental debut of astral size called ‘’Long Distance Trip’’. An album really giving the chills to everyone that has listened to it by redefining the term psychedelic rock and by proving that you don’t have to include constant riffing and blastbeats if you want to produce something worth listening. Their second album ‘’Revelation & Mystery’’ one year later made them also come to Greece, where I saw them and was amazed by their skills on the stage. They played almost all their material for over an hour and a half and people left speechless from the trippy feeling they offered while playing.

If you are included on the lucky ones that have seen the band live, you know better that what I’m going to write here is merely a hint of their perfection on live occassions, but since it’s the album that matters this time, let’s forget what we’ve known about them so far, right? The third album comes with a great title and a great cover. Entitled ‘’Waiting For The Flood’’, it makes you dive inside the amazing painting of the cover and become one with the desert landscape it shows. I don’t know if you’ll also be waiting for a flood like the title says, but I surely know that you’ll be flooded by forty eight minutes of ‘70s based music, put into reality, produced and played under a modern touch that bridges the gap of the decades until the current moment. The band has returned to the long track durations and all four tracks exceed ten minutes.

‘’Shringara’’ which opens the album is not only the longest track of the album and the reason why you’ll enter the spaceship for the long distance trip once again, but is also the second largest they’ve written so far in their career (‘’Double Freedom’’ from the first album remains untouched with its twenty three minute duration). An excellent production, a clean sound and a desert wind are surrounding your senses as the track evolves. Sit back, relax, close your eyes and become one with all thoughts that come first inside your mind. Allow this trance-like state take control and you will enjoy this listening procedure much more than you can imagine. Suddenly the weight of the world seems lighter and all problems seem to have vanished, so all that matters is the vibe pouring from the speakers in Samsara’s third album which is the most minimalistic they’ve created so far.

The title track may become your favourite, as it slowly opens its wild cards while it flows, the vocals are sounding hypnotic, but also convincing. You get paralyzed and numb, like you are unable to express while also feeling full and circled with new soundscapes inside your ears, like your hearing has expanded and you catch even the lightest sound around you. The album works perfect for your relaxation and self-search, but that doesn’t mean it’s room music for some yoga practice or something. The sound remains heavy and you are certain that if these guys would come out somewhere around 1976 for example, they’d be surely considered one of the best bands of all times worldwide. On the other hand, you don’t need anybody to tell you how you will feel, so all I describe above will come so quickly and naturally to you, making it hard to believe how deep and personal is the impact of this release.

‘’Don’t Belong’’ and ‘’Brahmin’s Lament’’ simply put the end of the long distance trip for now, but it’s the thought that this band can do even better that makes you happy, despite the value of ‘’Waiting For The Flood’’ on its own. People claim that the third album is the most important, critical and life-changing for a band. Other times it’s also the best, something that’s not happening here, but it was surely one of the most notable releases of 2013, coming to the end of the year and making many people missing it inside the load of releases. Even now in the beginning of 2014, once you encounter this album, don’t miss it, as it is more than a great non-metal break from your usual listenings, but also a way to start digging some of the past bands that once wrote history. From Black Sabbath to Hawkwind and from the ‘70s to the middle 2010’s, music is proving to be priceless no matter the year, the genre and the duration. The trip continues…