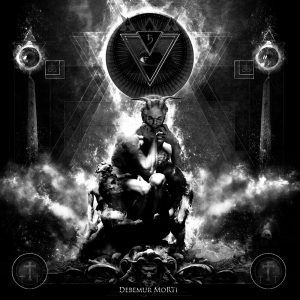 Black metal is an art of the senses, a darkened music genre that acts as a force, giving strength and refreshing the pneuma. The new waves of black metal bands, worldwide, tend to mix up black metal with a lot of music genres, especially with doom/sludge, industrial or avant-garde. Blut Aus Nord or ‘Blood from the North’, is one of the first bands, which wanted to make a change and slowly mixed up their black metal sound with avant-garde elements, creating something unique, a personal trace. Along with Terra Tenebrosa, they quickly became two of my personal experimental black metal records. Blut Aus Nord, returned this year with an EP (“Debemur Morti“), after the release of Cosmosophy back in 2012, which attracts all the attention it can get, not only because of its music, but also because of the beautiful artwork of its.

“Debemur Morti“, is a two sided release, with the first part containing two original songs, made by the band, and a second part, containing a cover of the song Bastardiser, originally performed by the band Pitchshifter. As it is common for the EP, I will try a track by track review for this one.

The record starts with ‘Tetraktys’. The song is not the strongest of the record. There are ambient instrumental parts, with a slightly industrial, dizzy influence in the song. ‘Tetraktys’ is reaching the blackened sludge music genre, just like if Neurosis would turn their music into sludge metal. There are not classic vocals in this one, just ambient and mind-haunting screams and growls. After this one, ‘Lighteater’ comes next. I personally choose this to be my favorite between it and the first original song. ‘Lighteater’ is based on guitar riffs, black metal guitar riffs to be specific. The guitars sound so active with the whole song, creating a ‘melting’ sound, to accompany the voice. The philosophy into the band’s sound and performance is to experiment, without losing their black metal traces, totally waiving into an avant-garde or blackened sludge sea. The specific change is as respected as the first, straight-forward, black metal records of the band.

Next, we have ‘Bastardiser’, a cover song which automatically becomes the best moment of the EP. The band projects a black metal version of Pitchshifter and we all like it. The song is powerful and dynamic, not losing the track by the previous songs. The cover looks like a continuation of the slow and heavy, but wonderful feeling the band wanted to gift the audience with the previous original songs.

Overall, the record could be a better one. The first song got me a poker-face, because it is not as strong as the next two great songs. I think a seven out of ten is a fair rating for this EP. It only got us hungry for the next full-length record of the band, which for sure would be very interesting, if we consider the slow progression o f Blut Aus Nord.