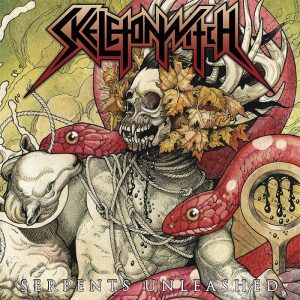 Skeletonwitch is one of the oldest black/thrash bands in the new breed of US thrash alongside Toxic Holocaust and are definitely an established band. I wasn’t pretty familiar with their material, their “Forever Abomination” (2011) record was really well received though. Remaining consistent which means releasing a new album every 2-3 years is ideal for every today’s band, when accompanied with the proper inspiration.

Their new album “Serpents Unleashed” kicks in ripping fast in the vein of Destruction with the title track destroying everything including some melodic harmonies in the solos and a strong black metal influence. The black metal feel continues with “Beneath Dead Leaves” starting off with blastbeats and Black metal riffage being almost melancholic in a way but with great melodic black metal riffage reminiscent of Dissection. Things get faster (still on the black side though with strong influence of melodic/death metal) reminding a bit of the Aura Noir mix on “I Am Of Death (Hell Has Arrived)” including an amazingly melodic chorus. An album favorite no doubt. Then we have “From A Cloudless Sky” keeping up the Black metal riffing (its most melodic aspect that is) with some Thrashy outbursts adding some great soloing and a beautiful chorus. Coming up next a more raw intro on “Burned From Bone” which leads us to more Melodic Death metal influenced parts and a groovy chorus.

“Unending, Everliving” is a faster track balancing between thrashy speed and midtempo riffage with a Black metal influence even close to Emperor at times. One more of my personal favorites of the album. What follows is “Blade On The Flesh, Blood On My Hands“, a fast track bringing back the old school black/thrash feeling more still maintaning the melodic aspects shown before. A more epic track follows that called “The Evil Embrace” blasting in the chorus and going a bit fast before the chorus. “Unwept” starts off in a thrashy way only to continue in a more melodic death metal way. Up next blastbeats and Blackened metal riffage brings us “Born Of The Light That Does Not Shine” a somewhat fast track that sounds like a lost track of Dissection from “The Somberlain”/”Storm Of The Lights’ Bane” sessions, which means it’s great as it can get. Dissection influence leads us to the next track “More Cruel Than Weak” which brings more raw Black metal influence up front and midtempo speed, speeding only on some melodic riffs.

This is a really solid record of black/thrash metal, with a lot of melodic death metal and swedish black metal influences. Shows the consistency of this band to anyone who comes in touch with them for the first time. Thumbs up!