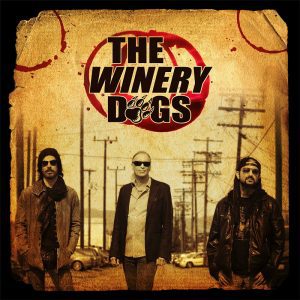 Mike Portnoy looks like a busy musician. He joined Adrenaline Mob, just right after quitting from Dream Theater and Avenged Sevenfold, only to jump into another bandwagon after a couple of records. This time, he teamed up with Richie Kotzen (Poison, Mr.Big) and Billy Sheehan (Mr.Big, Talas), famous and talented musician with great influence in the rock scene. The trio created The Winery Dogs, a band which embraces the classic rock sound and performing. The band released a self-titled record within 2013.

Having read a couple of interviews from the band and Mike Portnoy, I always noticed that someone would characterize the band’s music us something influenced by classic rock bands like Led Zeppelin for example. I don’t know if is possible for a band to perform, like this anymore, but I would love to find out a band like influenced by the rock music of the specific decade. While listening to the record, it turned out that the songs had nothing to do with the specific statements.

As sound is concerned, the songs are bonded with old-school, overdrive guitars, reminding a bit of an older sound and heavier one. However, all the songs are mixed up with music breakdowns, totally ruining the whole result. Those breakdowns are slower, followed by pop, soft vocals. As a result, the whole rock and roll feeling is totally destroyed, as in ‘Elevate’ for instance. Therefore, as a whole, the record aims for a different target group, the mainstream rock fans, rather than recording something solid and gripping.

There are a few moments I liked in The Winery Dogs. I totally disliked the soft, power-ballads like ‘I’m No Angel’ or ‘You Saved Me’. Whenever the band decides to get ‘dirty’, creating beautiful guitar solos and riffs, the songs become better. There is great talent in the musicians of The Winery Dogs, especially in bassist, Billy Sheehan. However, the talent is consumed by the songs themselves and does not get effectively visible on the music created.

I found myself totally disappointed by the record and what the band stands for. I was expecting an interesting approach to rock music and why not something reaching out the older roots of rock, like in the seventies. ‘ The Winery Dogs) is ,for sure, a record to avoid.