Gamma Ray
Empire Of The Undead 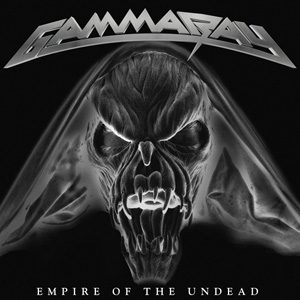 One of the pioneers of Power metal, Gamma Ray, led for over 2 decades by guitar mastermind Kai Hansen (also known from fellow countrymen and co-pioneers Helloween), releasing genre-defining classics such as “Heading For Tomorrow” (1990) and “Land Of The Free” (1995), are being reviewed this time. Consistency is a strong pro for every band that counts over 2 decades of making records and touring around the globe, and Gamma Ray despite their mid-era ups and downs have managed to come out strong making solid records that honor their name and legacy.

Their new album “Empire Of The Undead” kicks in with a over-9-minute epic called “Avalon“, in the vein of songs like “Rebellion In Dreamland”, starting balladesque coming to a headbanging heavy riff then to an amazing chorus then turning into a more classic mid tempo Power metal track including great dual guitar harmonies and overall soloing before ending with another chorus. Next comes “Hellbent” which is like Kai Hansen has found a lost “Painkiller” headbanging track and re-did it Gamma Ray way, being the massive Priest fan he is, a metal anthem lyrically speaking and how couldn’t it be when it’s influenced by the greatest riff-machine in metal history (OK alongside with Accept!!). Another dirty rocking track called “Pale Rider” (if you close your eyes you can just imagine riding a big bike to the sunset. Yes, it’s filled with biker attitude) comes to keep us headbanging including the appropriate soloing.

“Born To Fly” follows keeping up the tempo being closer to the classic Gamma Ray sound with its trademark melodic chorus and leads/soloing ending with dirty riffage. A classic lead phrase in the vein of “Heaven Or Hell” or “I Want Out” leads us to “Master Of Confusion“: headbanging, melodic, up-tempo and downright awesome so no problem at all! Another trademark track for Rays, I bet it sounds awesome on live shows. “Empire Of The Undead” is the most aggressive track on the album made to cause moshpits in shows, with some keyboards in the headbanging chorus as well as amazing soloing ending in chants and the intro riff. Now it’s “Time For Deliverance” the albums’ ballad, with beautiful combination of acoustic guitars and piano leading to a powerful chorus meant to be sang out loud.

Back to a darker track kicking in with demons hissing called “Demonseed” starting off with Heavy staccato riffage (some necks will snap on this one) including a well-fitting chorus and a middle clean guitar part with melodic soloing before turning into the final chorus. “Seven” brings up the tempo once more showing more trademark Power metal riffage and a kick ass chorus, simply awesome with the whole band chanting along. “I’ll be back” that Arnie intro brings us the lead of “I Will Return” which turns into another headbanging mid tempo track with one more trademark chorus and melody leaving always room for great tapping solos then back to the amazing chorus and melody to close the album.

Cheers to Gamma Ray for producing such great albums even after a million bands influenced by them. Crank it up loud we need more people like Kai in the metal business!!