Insomnium
Shadows Of The Dying Sun 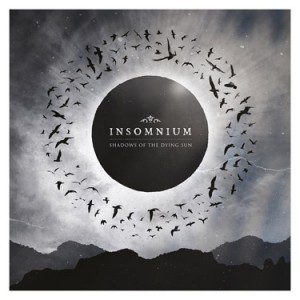 Hello again my friends. It is been awhile since I wrote a review and thankfully my time has come again with Insomnium’s new release. And fortunately it is a great melodic death metal album to review. Finland has a big background of melodic death metal. Just remember Amorphis and Sentenced. Lately with the huge success of Children Of Bodom, Finland started to produce more and more successful death metal bands with tons of melodic lines. Insomnium is one of them and in my opinion they are one of the best.

There are many who would say that “Shadows Of The Dying Sun” is just another album of Insomnium; that the quartet from Finland just found a safe road to walk through it. I believe that you will find many elements of their past. Those elements that brought them to success, but I must disagree that this CD is a copycat of their previous works.

Let me begin from the opening track. It is the standard intro song again. A couple of minutes before the hit song came in. A couple of minutes are enough to prepare you for what is coming. The whole atmosphere of the album is concentrated in the introductory song. The songs that come next is of great balance between the fast, heavy and brutal nature and the melodic riffs of Insomnium. The melody is the dominating trait and they enhanced it with great brutal moments. Probably the melody excels on “Shadows Of The Dying Sun” than “Across The Dark” or “Above The Weeping World”. I think that this is the result of the clean and rich production they have in this CD.

Even the almost ballad songs in this album, such as “Lose To Night” or “The Promethean Song”, have a strong structure and they get straight into your head. I found myself whistling the melodies of them quite several times. The only disadvantage of the album is that the main riffing on most of the songs seems the same; at least to my ears. And this led me to think I was listening to the same song over and over again. Of course that happened the first two or three times. When I gave the CD the appropriate attention, I realized its immense depth.

Overall Insomnium made a great work composing and orchestrating the “Shadows Of The Dying Sun” and I consider myself lucky to review this as my first album for 2014. “While We Sleep” and “The River” are two songs that stands out for me. Especially the second one is mesmerizing despite its eight minutes duration.

Thus I advise you not to hesitate and enter the world of dreams through the shadows of Insomnium.