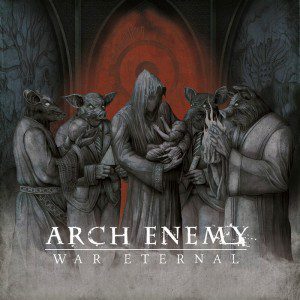 Arch Enemy, once a small band by Michael Ammott, former guitarist of Carcass, now a strong name for the mainstream metal scene of today. Their more thrashy melodic death metal has found many fans around the globe and made them the name they are today. What made them so special was the leading roar of Angela Gossow (what would you expect from a woman raised on Morbid Angel?), making her the absolute female metal icon of a new generation. Some of their best material came with “Wages Of Sin” (2001), “Anthems Of Rebellion” (2003), “Doomsday Machine” (2005) and “Rise Of The Tyrant” (2007). Their previous one “Khaos Legions” (2011) didn’t quite cut it as it sounded kind of uninspired or generic. But before the new record “War Eternal”, Angela Gossow leaves the mic to Alissa White-Gluz from The Agonist, stating she couldn’t handle the touring anymore (she faced huge asthma problems, so we pretty much saw that one coming).

The album starts with a melodic intro before kicking with “Never Forgive, Never Forget” ripping fast and blasting, showing that the band needed that change to refresh their sound, making this ideal for mosh pits in their live shows. Then comes the title track, which is classic Arch Enemy midtempo material as we love it, with its Uli Roth inspired melodies in the chorus and mindblowing solos from Michael Ammot. Alissa shows she is the perfect person to take the vocal duties for the band, as she delivers a really vivid and strong performance throughout the record. “As The Pages Burn” comes up next to thrash our ears with great riffage and a really good chorus. “No More Regrets” starts with the ever-present Ammot leads and even though it begins well things are not that great in the chorus which was kind of overloaded. Not the best Arch Enemy are capable of making.

“You Will Know My Name” is the answer to the previous track: full of melodies (even keyboards are being used), vivid and even Hard Rock-inspired riffage (Michael you love UFO/Scorpions we know that) with a great lead melody used in the beautiful chorus! It wouldn’t surprise me if this was the next single of the album, this albums’ equivelant to “The Day You Died” off “Rise Of The Tyrant”. After the “Graveyard Of Dreams” guitar interlude we are lead to “Stolen Life” with its midtempo riffage and trademark Swedish Melodic Death metal melodies, that could easily be a great live show pleaser. “Time Is Black” is the grooviest track of them all, snapping some necks in the beginning then getting midtempo and from there to something like a symphonic chorus mixed with melodic death metal. Really strange mix and I don’t think it worked well, the first filler track.

“On And On” follows up, another midtempo track of the same style, which is better than the previous one especially in the chorus including some great soloing in the middle. “Avalanche” brings a Bach reference in the beginning leading to groovy/symphonic riffage only to turn midtempo, and end to a beautiful chorus. Here comes the last track of the album with vocals “Down For Nothing” an aggressive midtempo track, with a dark chorus following. The album ends with “Not Long For This World” which starts in a Doom/Death way to go into a really familiar Arch Enemy melody and end with a piano melody.

One of the best ways possible to introduce Alissa to the Arch Enemy fans. Better than “Khaos Legions” and a strong sign of changes to come within Arch Enemy in terms of incorporating those interesting symphonic elements in the bands’ sound. I also liked the more natural production, another sign of change. Really good to great record, wish the next one is even better! Cheers to Arch Enemy!