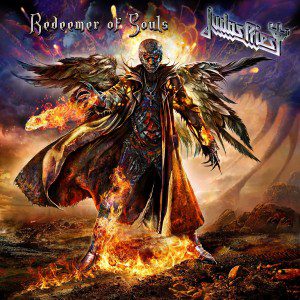 Whenever I am looking for the roots of heavy metal, the bands which created our beloved music style and its components, the band I mostly aim for is Judas Priest. The band’s records during the seventies were a blast; I totally believe that their prime, heavy, hard rock style is the one which influenced the UK scene. They continued with the influence two decades after and ‘Painkiller’ opened the nineties with a unique, dark, metal style. When K.K. Downing quitted, everyone thought that Judas Priest were over. However, along with Richie Faulkner, the band returned with ‘Redeemer of Souls’, reclaiming their throne.

‘Nostradamus’ was a lame record from every aspect. We haven’t really been into concept and sophisticated records for Judas Priest and I am pretty sure that the band has accepted that. As a result, ‘Redeemer of Souls’ is more like a ‘Painkiller’ (almost) wants to meet ‘Defenders of the Faith’. The band recorded some pure heavy metal tracks. Why not actually? They created heavy metal! They have every right to stick with it.

As far as K.K Downing’s absence is concerned, yes there is nostalgia within this record, nostalgia for records like ‘Screaming for Vengeance’. However, there are plenty of awesome guitar riffs in the record and I believe Richie is a great guitar player; he was just unlucky he had to fulfill a position in the Judas Priest. Rob Halford’s voice can still be magnificent and raw, without although to reach their past vocal abilities. In ‘Halls of Valhalla’, Rob screams and shows off his talent, stating that he may be old but he is in the best condition he can be.

There are plenty songs which are actually influenced by the ‘Painkiller’ record such as ‘Halls of Valhalla’ or ‘Metalizer’. There are many, on the other hand, which remind me of records just as ‘British Steel’. Those songs are less rapid and groovier, such as ‘March of the Flames’ or ‘Down in Flames’. There’s also room for epic metal lovers in the appreciation of ‘Redeemer of the Souls’ bandwagon. Guitar riffs of steel are mixed together, along with guitar solos, to create an epic feeling, which can be indentified in songs like ‘Sword of Damocles’ easily.

Does the record fail to deliver something fresh which can totally be compared to the new blood of metal? No, because Judas Priest do not compete in the same ‘league’. Bands like the Judas Priest creates records which will help them continue their legacy, not create another one. As a result, my personal opinion stands with something easy to comprehend; if anyone wants to listen to something which is amusing, rocking and bad-ass, just buy and get yourself lost into ‘Redeemer of Souls’. It is totally worth it!