Nachtmystium
The World We Left Behind 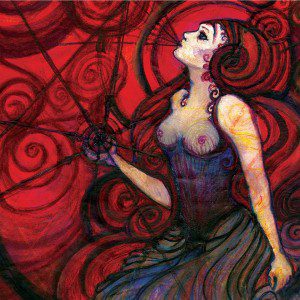 Once again I have the chance to review a black metal band which loves to experiment on the music they create. I just love how many bands tend to mix things up whenever they compose music, without forgetting their roots and without staying the same as well. Nachtmystium from the US (yes the US scene rocks again), is one of those bands and their latest release, ‘The World We Left Behind’ got my attention from the very first moment.
Black metal is the music genre which expresses so many feelings which tend to express someone in every moment of his life, positive or negative, day by day. I expected to find numerous of emotions inside ‘The World We Left Behind’ too. Its artwork is something notable too. It is a painting of a naked lady, a painting reminding me of expressionism and art generally. The music of the record can be described as a painting too. A great one but with many abstract moments…

First things first, the records opens with ‘Intrusion’ and ‘Fireheart’. The first song is an instrumental opening and then the masterpiece, ‘Fireheart’, comes next. Yes, you guessed well. The best moment of the record is actually inside ‘Fireheart’. The song is based in one of the most catchy but also dark riffs I’ve ever heard. From the very first moment, the band introduces us into their influence, which is actually notable throughout their tracks. Of course I am referring to the first Moonspell years. I can hear the influence in every moment in the record, especially in ‘Fireheart’ and Blake’s voice.

The main problem with ‘The World We Left Behind’ is that many songs tend to force you to press the skip button. For example ‘Voyager’ or ‘Into the Endless Abyss’ create the specific urge. A record packed with great songs and lame ones is worse than just a bad record. However, ‘Fireheart’, ‘Epitaph of a Dying Star’ or ‘In the Absence of Existence’ are here to accelerate. Whenever the band is mixing the black metal roots with psy and destructive guitar melodies, the song tends to be a great one. Ambient moments throughout the record just don’t fit well for Nachtmystium, which cannot get expressed rightfully with those post-black-influenced songs.

Full of inspiring moments, ‘The World We Left Behind’ is a record which claimed what Europe could not claim; the continuation of experimental black metal. Gothic, post-black as well as ambient black metal can be found in only one disc, with an outcome which cannot be described as completely successful, but as a try which gives Nachtmystium the opportunity to conquer our hearts from their very next music album.