Spotlight: “Chimes at Midnight: A Tribute to Mastodon”

It takes only four musicians to form an idea and that’s what Mastodon is. The rockers from Atlanta could not even imagine the success they will enjoy, when they formed the band one decade and a few years ago. The tribute below, is an article aiming to the discography of the band, reviewing the milestones of their career.

The story of the mighty Mastodon begins in Atlanta, one of the most famous cities in the US. Four young fellas were enjoying the city’s underground music scene, each other in different bands. The duo, Troy Sanders and Brent Hinds, were busy recording and performing on stage with their personal project, ‘Today Is the Day’. They also had some personal bands, with Brent Hinds’ surf rock project (Field without a Face) to be a famous one in the local scene.

On the other hand, Bill Kelliher and Brann Dailor were members of a math metal band, named Lethargy. None of the above bands managed to create something that would offer a chance to prove themselves with a record’s company’s deal. However, the four guys, who would form in the close future the band Mastodon, were hungry about success and music.

In 2000, during a High on Fire gig, the four members would get to know each other and arrange a jamming section, in a local music studio. Their first try to perform and jam together would be a total disaster, with Brent Hinds trying to perform while being high. During the next few jams, the band will get bonded together and Mastodon will become a reality.

Mastodon needed a lead vocalist, so the band decided to hire their friend Eric Saner, who moved 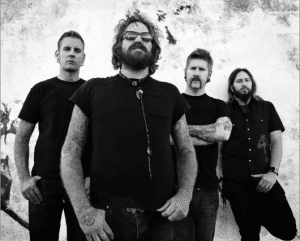 in Atlanta right after the band’s offer. They recorded together a self-titled demo with nine songs, which most of them will be remixed and re-released in their first EP, titled ‘Lifesblood’, back in 2001. The band’s hard-working mood and their constant touring gave the chance for the band to achieve a record deal with Relapse Records, one of the most influential records label in the USA.

Besides the band’s promotion which leaded them to a major tour, Eric Saner decided that he no longer wanted to be part of Mastodon and the two sides parted away. Eric moved back to New York and the band continued without a lead singer, with Brent Hinds and Troy Sanders to share the vocal duties.

Right after the band’s first tour, Mastodon closed themselves in the studio and recorded ‘Remission’, the debut record that would turn Mastodon famous worldwide. The record was a mixture of primitive sludge metal, along with progressive metal. The sound was raw, extreme and the band used mostly growls and death metal vocals. ‘March of the Fire Ants’ was the band’s first single; a powerful song that would be their first video clip too. ‘Ol’e Nessie’, ‘Trainwreck’ or ‘Trilobite’, are the proof that the band did not want only to side with extreme metal, but also with the mid-tempo, full-of-emotions, melodies. The band impressed everyone with the way they mixed technical guitar riffs with excessive drumming, creating a result which is considered fresh and innovative. Remission is based loosely on the element of fire, while the next three records will be based on the other three natural elements.

[page_title text=”The Years of the Elements”]

On August the 31th of 2004 Mastodon released their second full-length record, which is based on the element of water and on Moby Dick. Its title is ‘Leviathan’. The band opens a whole new world with ‘Leviathan’, finally getting their sound a peak which all the metal fans could appreciate. The record is catchier than ‘Remission’, with a great number of hit-songs.

‘Blood and Thunder’, ‘Iron Tusk’, ‘Megalodon’, all those songs became fast enough favorable between the fans. 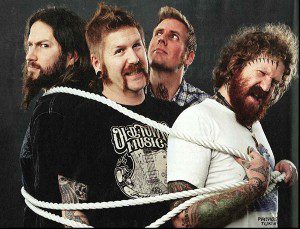 The band still included harsh and brutal vocals, but actually swept the sludge influence out of their music. Brann is actually a beast in this one, giving a great number of drum fillers even in the drum fillers! ‘Island’ is the most extreme song off the record, reminding me of the ‘Remission’ years.

In ‘Leviathan’, Mastodon also included two surprises for the fans. Those surprises were the collaborations with two great musicians. First of all, Neil Fallon contributed in the vocal lines of ‘Blood and Thunder’, the opening song of the disc. Scott Kelly also appeared in ‘Aqua Dementia’, a song which contains dizzy and progressive guitar lines, which will fit more into the band’s next record. Scott Kelly never missed a record of Mastodon since then, collaborating in a random song in every single one.

Right after ‘Leviathan’, Mastodon managed to release a compilation record, titled ‘Call of The Mastodon’. It contained the songs off their first EP and demo. They also produced ‘The Workhorse Chronicles’, a documentary with video coverage of their tour for promoting ‘Leviathan’.  This documentary is just the proof of Mastodon’s rise to fame.

‘Blood Mountain’ is the next milestone for the band. The record was released on 2006, based on the theme of Nature and the earth element. It also contained the story about a man climbing a magical mountain, full of strange creatures, symbolizing the struggle of the modern man/woman to rise and succeed in his/her life.

The record was once again something unique and honestly, in 2006 nobody has ever listened to a record like ‘Blood Mountain’ before. It differed from the band’s second record. It was more progressive, with a great number of changes in the guitars. Just take a closer look to songs like ‘Capillarian Crest’ and ‘Bladecatcher’ and focus on the guitars. The dual guitar lines are totally an influence of NWOHM for Mastodon. The complexity of ‘Blood Mountain’ introduced the fans into a new way of metal, describing a music style that would not fit into any press label.

Josh Homme is participating in the record too (‘Colony of Birchmen’ and in the end of ‘Pendulous Skin’), along with Scott Kelly (Crystal Skull), Cedric Bixler- Zavala (Siberian Divide) and Isaiah ‘Ikey’ Owens (‘Pendulous Skin’)

After the release of ‘Blood Mountain’, the band continued with a long tour. By this time, although their records were a blast in the music scene, their on-stage performance could not be characterized as the ideal one, especially in the vocals. When the tour ended and the band returned back in the US, Brent Hinds got injured in the cranium by Soad’s bassist Shavo after the MTV Video Awards. What was the result? Brent composed the band’s next record (or a major part of it) in the hospital with an acoustic guitar.

‘Crack the Skye’ became the band’s fourth full-length record. It is based on the last element of air and contains a unique story too. It describes the adventures of a handicapped boy, which projects himself with an astral projection. Unlucky he was, the cord which was holding his soul and body as a one was cut loose and the boy got lost in time and space, 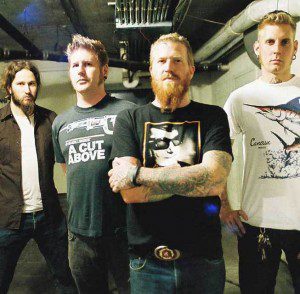 travelling through a wormhole to the Russia of the Czar, controlling Rasputin’s body. Rasputin helps the boy to return back in his body, escaping from his assassins.

The record’s title is a tribute to the memory of Skye, Brann’s sister who committed suicide. The songs are risky, creating a solid storyline through music, with beautiful melodies and fresh ideas. ‘Crack The Skye’ is my personal favorite record of the band, a record which makes me shiver each time I listen into it, losing my mind somewhere between Russia and space. One just cannot stop singing along with the vocals, in which Brann Dailor also participates for the very first time. The record is greatly emotional, with a great number of powerful compositions.

A lot has happened to Mastodon since the release of ‘Crack the Skye’ back in 2009. The band toured constantly, reaching venues in almost every country and region in the world. There were minor problems with Bill’s health, but the band carried on, recording a live record (‘Live at The Aragon’) and hitting the studio for their fifth record.

For their next movement, the band just relaxed and created a record that they would enjoy. Without it to be a concept one, ‘The Hunter’ was released in 2011, with the album’s title to be a reference to Brent’s brother who was a hunter and died right before the record was released.

‘The Hunter’ approaches the bands philosophy in a different but interesting way. The growl vocals were taken off the record, with the band trying to create something stable but exciting (and more stage-friendly). The sound is also closer to heavy rock 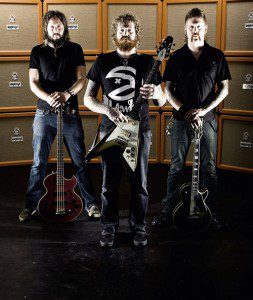 rather than in metal (‘Curl of the Burl’, ‘Stargasm’, ‘Dry Bone Valley’ and etc). The sound is also more mainstream than we were used to. However, Mastodon created beautiful and fun songs once again, without losing even a bit of their energy and uniqueness. ‘The Sparrow’, ‘The Hunter’ and ‘Stargasm’ are the ballads of the record and are totally powerful and inspiring, especially the last one.

A large tour took place right after ‘The Hunter’s’ release, with Mastodon to improve greatly their sound on stage as well as the vocals. They even released another live-record, ‘Live at Brixton’, but digitally.

In 2014 the band announced the title of their next record and the date of the release. On 24th of June, this year, Mastodon are releasing ‘Once More Around the Sun’, a record which is a mixture of ‘Blood Mountain’ and ‘ The Hunter’, as the two singles are proving. The four guys from Atlanta are just a never-ending music machine, creating great songs. And the days are coming closer… for the band to travel around the sun once more, aiming for the stars.