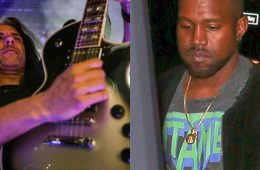 Manos SpanosNovember 6, 2013
Peter Atkinson of Metal-Rules.com recently conducted an interview with guitarist Alex Skolnick of San Francisco Bay Area metallers TESTAMENT. A couple of excerpts from the chat follow below. Metal-Rules.com: The last time you toured with SLAYER, was Jeff Hanneman still with the band? Skolnick: The last time we toured with them, I think it must have been one of the last tours that Jeff did. Of course, no one knew that at the time. He hadn't developed his health issues so Gary [Holt, SLAYER's current touring guitarist] wasn't there yet, he was still going full-time with EXODUS, who we also toured with. You couldn't have known what was going to happen. That was 2010, and it was only 2011 when the "Big Four" shows happened and he [Hanneman] couldn't do those, which was such a shame. Metal-Rules.com: You wrote a very eloquent and well-circulated tribute to Hanneman after his death. TESTAMENT toured with SLAYER many times, but did you really know him that well or was that more to show respect for his talents? Skolnick: I never really knew him well at all. He was very difficult to get to know, actually. And I don't say that disrespectfully. Even close friends of his said it would take a long time to get to know him. Robb Flynn, a friend of ours from MACHINE HEAD, wrote that he'd toured with them, like, eight times and he still felt like he barely knew him. He kept to himself more. I don't think he related to many people — that was just the way he was — but he was a towering presence, no question. I wrote about him more from his reputation, which is tremendous. When you think about the music, the music is great and he is such a part of it. With all due respect to Kerry [King], when you take a look at the iconic SLAYER tunes, it'sHanneman's riffs all over it. Metal-Rules.com: I haven't seen anything about Chuck's [Billy, TESTAMENT singer] health in a long time, so I'm assuming no news is good news there and his health is good. How's the rest of the band holding up, since none of you are kids anymore? Skolnick: Yeah, thankfully, that's worked out really well. Chuck's been much better [after a battle with rare form of cancer in 2001]; he's been in great shape. Everybody in this band, knock on wood, is in relatively good health. I think as time goes on and you realize that you don't have as much free time as you once had, your perspective changes. Fortunately, most of us realize that and take better care of ourselves. I was always a lightweight when it came to alcohol and never really developed a taste for other substances, so I think that worked to my benefit. I was taking care of myself early on, and I would get a lot of funny looks, but it seems like now many people are catching up to me. Metal-Rules.com: TESTAMENT's been pretty busy, especially over the last few years, and just about everyone has at least one other band going on the side — notably Gene [Hoglan, drummer] with DETHKLOK and now, apparently, with DARK ANGEL again. Are you all finding you are able to balance TESTAMENT with the other things you want to do? Skolnick: That's been the toughest, I think, with Gene. I used to be the thorn in the side, with my trio shows and I was doing TRANS-SIBERIAN ORCHESTRA for a long time. I narrowed it down to TESTAMENT, my trio [ALEX SKOLNICK TRIO] and a world music project I'm working on. But I have control over those, so I am able to let the chips fall where they may withTESTAMENT, because usually their shows are booked well in advance. Occasionally, there are some curveballs where we get last-minute things like festivals or something. I'm mostly able to work my activities around the TESTAMENT schedule. Eric [Peterson, TESTAMENT guitarist] and Chuck do their side projects [DRAGONLORD and DUBLIN DEATH PATROL, respectively] so sporadically that it never poses scheduling problems. With Gene, it got a little bit easier when he wasn't playing in FEAR FACTORY anymore, which happened last year. And theDETHKLOK shows are usually booked far in advance, so we can work around those. Occasionally, he'll have to miss a few dates, a friend of ours, Mark Hernandez fromFORBIDDEN, was able to fill in and it worked out. But with all of us, we really feel like the core lineup and we do everything that we can so the fans get to see this lineup. Read the entire interview at Metal-Rules.com.
05 min read 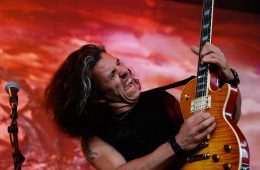 TESTAMENT Guitarist: ‘It’s A Pleasure To Play All These Different Styles Of Music’